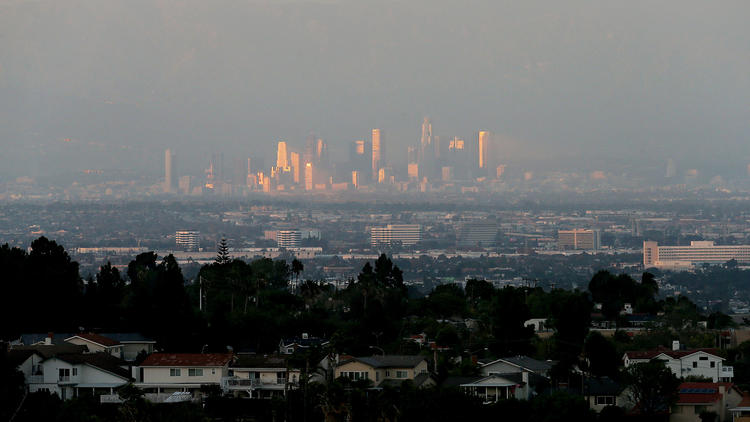 Southern California is experiencing its worst smog in years this summer as heat and stagnant weather increase the number of bad air days and drive up ozone pollution to levels not seen since 2009...

Where pollution is worst, in the Inland Empire, hospitals and asthma clinics are reporting increases in patients seeking treatment for respiratory illness, their breathing difficulties exacerbated by the persistent heat and pollution.

Ozone, the lung-searing gas in smog that triggers asthma and other health problems, has exceeded federal standards on 91 days so far this year compared to 67 days over the same period last year, according to South Coast Air Quality Management District data through Monday.

And it’s not getting any better. So far, every day of August has been over the federal limit of 70 parts per billion.

Peak concentrations of ozone have also jumped. The region recorded its highest ozone reading since 2009, when the pollutant spiked to 164 parts per billion, in the late afternoon on July 22 at the Crestline monitoring station in the San Bernardino Mountains.

“We've had a lot of high days, we've had high peaks and we're about halfway through the ozone season,” said Philip Fine, deputy executive officer for the South Coast air district.

Fine blamed the increase in smog on abnormally hot, stagnant weather, including some of the strongest, most persistent pollution-trapping inversion layers in years. It’s unlikely that increased emissions are to blame, he said, because of a wide variety of regulations that mandate increasingly cleaner cars, trucks and other vehicles.

The health consequences of more polluted air were obvious to patients at an asthma and allergy clinic in Upland earlier this week.

Retired librarian Caroline Whipple said it’s been so smoggy lately she’s been forced to stay inside her retirement community in Claremont.

“Otherwise my throat gets all messed up and I have a hard time breathing,” she said.

Garry Attridge, 54, an architect from Rancho Cucamonga, has suffered from a sore, itchy throat and wheezing, and has found himself reach for his asthma inhaler more frequently in recent months. He’s been giving more breaks to the youth soccer team he coaches. On the smoggiest days, he reschedules their practices to the evening when air quality is better.

“It’s disgusting,” Attridge said. “The air is so thick you can almost taste it. You can’t see the mountains. And it certainly affects the way they play, because they can’t breathe.”

This recent surge in smog is the latest indication that progress in the fight to clean ozone pollution is faltering following decades of improving air quality across Southern California.

A lack of air-cleansing storms during the drought had worsened ozone and fine-particle pollution across the state, though even those smog levels remained far below what plagued the Los Angeles region in the 1970s and ’80s.

Ozone is especially difficult to control because the corrosive gas is not emitted directly, but formed through photo chemical reactions when emissions from cars, trucks, oil refineries and an array of other sources cook in the heat and sunlight.

Southern California has the nation’s worst smog and fails to meet a series of federal ozone standards going back to 1979.

Cleaning ozone to current federal limits will require regulators to make massive emissions reductions over the next two decades. Climate change will complicate those efforts by increasing the number of extremely hot days that are prime for ozone formation.

The step backward on smog comes as the South Coast air quality board has been under scrutiny since being taken over by a new majority of Republicans pursuing a more industry-friendly approach to pollution regulation.

“Rather than pointing the finger at the weather, the air board should be using all of the tools they have available to reduce emissions,” said Evan Gillespie of the Sierra Club.

In June and July, Dignity Health Community Hospital of San Bernardino saw a 10 to 15% increase in emergency room admissions over the previous year, including many children with asthma and elderly patients with chronic illnesses that are worsened by smog.

“This should be one of the slowest times of the year for us, and that has not been the case,” said Cameron Nouri, medical director of the hospital’s emergency department.

Loma Linda University Medical Center has seen an increase in children with asthma symptoms. The hospital treats many people with chronic lung disorders who go to the emergency room in distress “because breathing is so difficult in heat or dirty air,” said Lori Scott, who directs the department of respiratory care.

Such observations are consistent with health studies that have shown an increase in emergency room visits, hospital admissions and missed school days when ozone pollution is high. Ozone also contributes to premature deaths from cardiovascular disease and other chronic illnesses.

Asthma and allergy doctor Heena Shah said she’s seen an uptick in respiratory problems since early June, as well as greater demand for inhalers and medication. She estimates about a quarter of her patients are suffering from asthma attacks, coughing, breathing difficulties and other flare-ups related to the heat and poor air quality.

“A lot of our patients have struggled,” said Frank Canavan, a physician assistant at Shah’s private medical practice, which has offices in Riverside and Upland. “This year you have seen a tremendous backpedaling. You're seeing ... congestion, watery eyes, irritation -- all of the symptoms that go back to those really bad days of smog in the ’70s and ’80s.”

Thousands of lives could be saved in California by stricter air pollution limits, study finds

Hiltzik: California's cap-and-trade program has cut pollution. So why do critics keep calling it a failure?