50 year-old Munjiah holds her chest X-Ray, showing specks in her lungs at her home near the Cilacap coal-fired power station in Central Java. Photo by Kemal Jufri/Indonesia.

Approximately 50,000 lives a year could saved by 2030 if no new coal-fired power plants are built in Southeast Asia, South Korea, Japan or Taiwan, a new study finds...

Air pollution from coal-fired power plants is already a major killer in Southeast Asia and that death toll could more than triple in the next 15 years, according to a study by researchers from Harvard University and Greenpeace published last week in the journal Environmental Science and Technology.

Indonesia, Vietnam, China and Myanmar would be the most affected, the study found.

Southeast Asia is in the midst of an intense drive to expand its power grid, with demand for electricity in 2035 projected to increase by 83 percent over 2011 levels. Much of that demand is slated to be met by coal, with Indonesia alone planning to build 176 new coal-fired power plants by 2030.

As a result, while emissions from coal have reduced in the United States and Europe (and are projected to decline in China), the researchers found that Southeast Asia, Korea and Japan could see their combined coal-related emissions triple by 2030.

If that happens, the region’s mortality rate will rise even faster. At present, air pollution from coal-fired power plants in the area of study were estimated to cause around 20,000 premature deaths per year. If all planned coal projects go through, that figure could reach 70,000 per year by 2030. 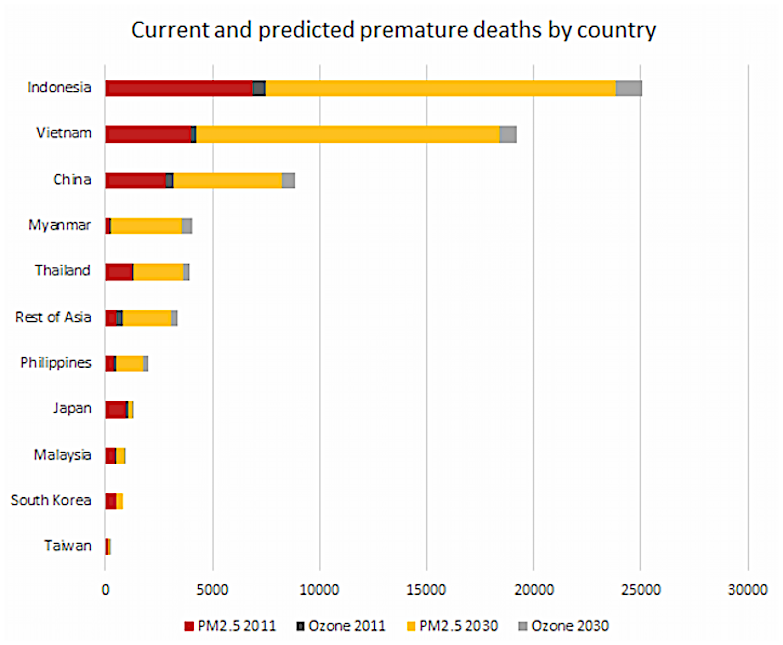 Current and projected premature deaths due to particulate matter and ozone pollution from coal. Graph courtesy of Lauri Myllyvirta/Greenpeace.

The researchers analyzed the impact of particulate matter and ozone pollution linked to existing and planned coal projects in 11 countries: Cambodia, Indonesia, Japan, Laos, Malaysia, Myanmar, the Philippines, South Korea, Taiwan, Thailand and Vietnam. (India and China were excluded due to the relative abundance of existing studies focusing on those countries.)

Calculations factored in the location and capacity of each project, local emissions standards and population trends in the project area. Results were analyzed using atmospheric models and global databases tracking and projecting causes of premature deaths. 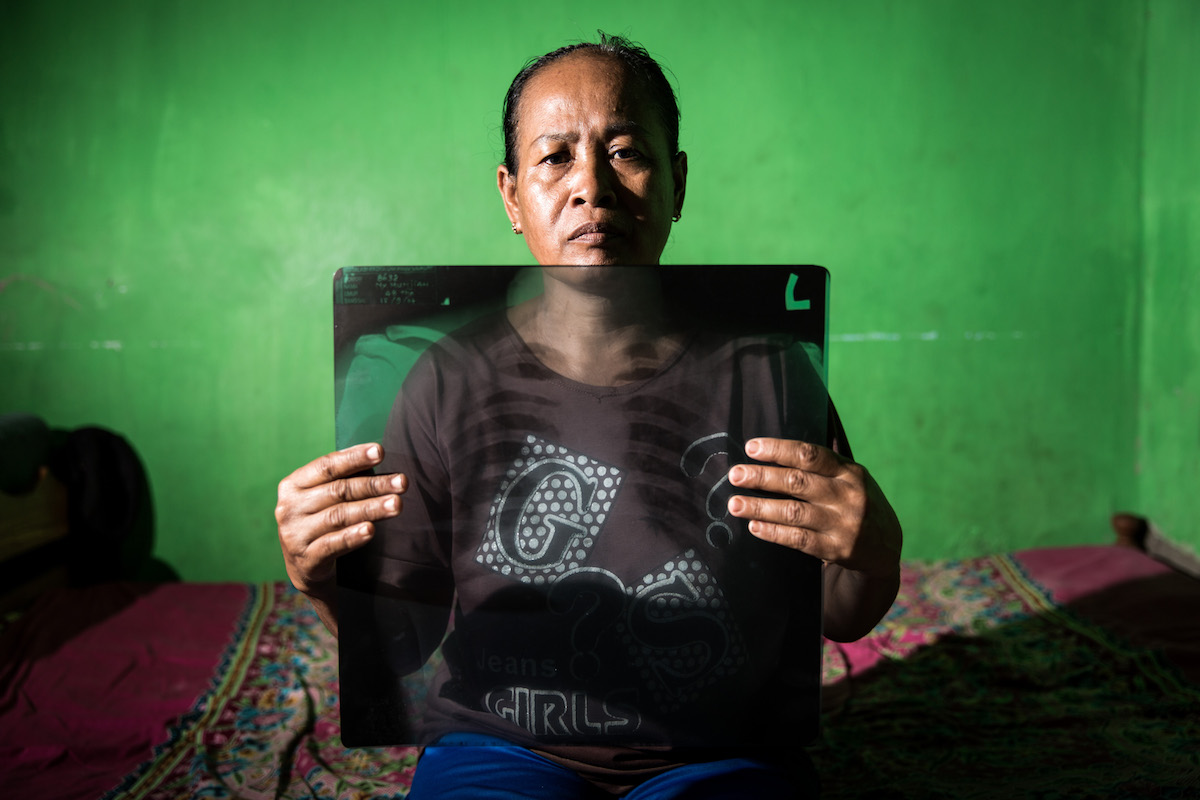 50 year-old Munjiah holds her chest X-Ray, showing specks in her lungs at her home near the Cilacap coal-fired power station in Central Java. Photo by Kemal Jufri/Indonesia.

The extremely high death rate for Indonesia comes down to the country’s dense and rapidly growing population, the large number of planned projects, and its relatively weak emissions standards.

The densely populated island of Java was found to be a hotspot for projected air-quality impacts. “The power plants built next to large population centers have the worst overall health impacts,” Myllyvirta said.

That doesn’t mean that shifting plants to less populated areas is without costs. “If you are one person living, let’s say, 50 kilometers from a power plant the personal health risk is the same,” he explained. “It’s just because of the fact that more people are exposed that you see the bigger impact.”

The Wujiata Open Pit Coal Mine near Ulan Moron, China, fills the air with coal dust. Photo by Qui Bo/Greenpeace.

Improving emissions standards could lead to “a very substantial decrease in health impacts,” Myllyvirta said. This is a perhaps even more true in Myanmar: “They have no standards, every project is just choosing what they like, what they want to do in terms of controlling emissions, so that’s definitely a particular worry.”

However, Myllyvirta said he hopes the study’s findings will encourage policymakers to look at more than just emissions controls. “For a number of reasons – the public health impacts, the impacts of coal mining on communities, the impacts of this coal expansion on the climate, for all these reasons – it would make sense for Southeast Asia to shift new investments into renewable energy as soon as possible,” he said.