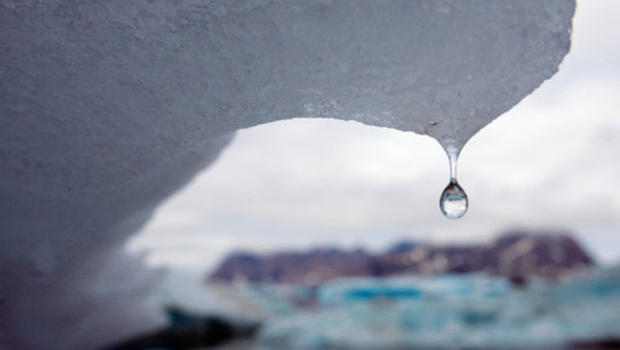 An iceberg melts in Kulusuk Bay, eastern Greenland Tuesday, July 17, 2007. The melting of the Greenland ice cap and its effect on the area around Greenland is one of the more immediate effects of climate change. AP

WASHINGTON  A new study paints a picture of an Earth that is warmer than it has been in about 120,000 years, and is locked into eventually hitting its hottest mark in more than 2 million years...

Snyder based her reconstruction on 61 different sea surface temperature proxies from across the globe, such as ratios between magnesium and calcium, species makeup and acidity. But the further the study goes back in time, especially after half a million years, the fewer of those proxies are available, making the estimates less certain, she said.

These are rough estimates with large margins of errors, she said. But she also found that the temperature changes correlated well to carbon dioxide levels.

Temperatures averaged out over the most recent 5,000 years – which includes the last 125 years or so of industrial emissions of heat-trapping gases – are generally warmer than they have been since about 120,000 years ago or so, Snyder found. And two interglacial time periods, the one 120,000 years ago and another just about 2 million years ago, were the warmest Snyder tracked. They were about 3.6 degrees warmer than the current 5,000-year average.

With the link to carbon dioxide levels​ and taking into account other factors and past trends, Snyder calculated how much warming can be expected in the future.

Snyder said if climate​ factors are the same as in the past – and that’s a big if – Earth is already committed to another 7 degrees or so of warming over the next few thousand years.

“This is based on what happened in the past,” Snyder said. “In the past it wasn’t humans messing with the atmosphere.”

Scientists give various reasons for past changes in carbon dioxide and heat levels, including regular slight shifts in Earth’s​ orbital tilt.

Four outside scientists praised the study’s tracking of past temperatures, with caveats about how less certain it is as it gets deeper in the past. Jeremy Shakun of Boston College said “Snyder’s work is a great contribution and future work should build on it.”

But many of the same scientists said Snyder’s estimate of future warming seems too high. Shakun called it unrealistic and not matching historical time periods of similar carbon dioxide levels​.

A fifth scientist, Michael Mann of Pennsylvania State University, called the study provocative and interesting but said he remains skeptical until more research confirms it. He found the future temperature calculations “so much higher than prevailing estimates that one has to consider it somewhat of an outlier.”