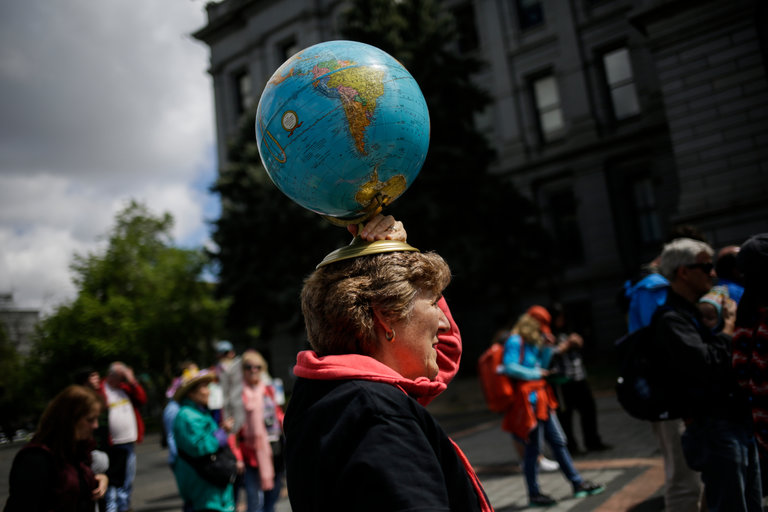 Nick Cote for the NYT

The real culprit of the climate crisis is not any particular form of consumption, production or regulation but rather the very way in which we globally produce, which is for profit rather than for sustainability...

So long as this order is in place, the crisis will continue and, given its progressive nature, worsen. This is a hard fact to confront. But averting our eyes from a seemingly intractable problem does not make it any less a problem. It should be stated plainly: It’s capitalism that is at fault.

As an increasing number of environmental groups are emphasizing, it’s systemic change or bust. From a political standpoint, something interesting has occurred here: Climate change has made anticapitalist struggle, for the first time in history, a non-class-based issue.

There are many reasons we do not typically talk about climate change in this way. The wealthy are holding fast to theirs. Bought politicians and state violence are on their side. Eco-apartheid is not yet seen as full-on apartheid. Everyday people have plenty to keep up with, and they don’t want to devote their precious time off work to often tedious political meetings. The inertia, it is sad to say, makes enough sense.

Perhaps the most common belief about this problem is that it is caused by widespread ignorance — even outright “stupidity” — and that its solution lies in its opposite, intelligence. This belief is neatly expressed in progressive opposition to Donald Trump and his administration. Trump voters are often criticized for being unintelligent, for voting against their objective interests. Trump himself is regularly portrayed as unintelligent.

The basic idea is that if voters were intelligent, they would vote for an intelligent person who listened to intelligent people and all would be well. It is a staple of the liberal imaginary. Reflected here is the obtuse belief that the populist tide is simply mistaken, that it has gotten something wrong, which has the effect of veiling the real and justified dissatisfaction with the past 40 years of neoliberalism. Also reflected is the common view, which is not confined to one end of the political spectrum, that our biggest problems are essentially technical ones, and that the solution to them lies in the empowerment of intelligent people. The aura around Elon Musk is an extreme example of this kind of thinking.

The problem with the general view that intelligence will save us is that it involves pinning the failures of capitalist society on supposedly dumb people (them), who, so the logic goes, need to be replaced with supposedly smart ones (us). This is a spectacular delusion.

When a company makes a decision that is destructive to the environment, for instance, it is not because there are bad or unintelligent people in charge: Directors typically have a fiduciary responsibility that makes the bottom line their only priority. They serve a function, and if they don’t, others can take their place. If something goes wrong — which is to say, if something endangers profit making — they can serve as convenient scapegoats, but any stupid or dangerous decisions they make result from being personifications of capital.

The claim here is not that unintelligent people do not do unintelligent things, but rather that the overwhelming unintelligence involved in keeping the engines of production roaring when they are making the planet increasingly uninhabitable cannot be pinned on specific people. It is the system as a whole that is at issue, and every time we pick out bumbling morons to lament or fresh-faced geniuses to praise is a missed opportunity to see plainly the necessity of structural change.

Put differently, the hope that we can empower intelligent people to positions where they can design the perfect set of regulations, or that we can rely on scientists to take the carbon out of the atmosphere and engineer sources of renewable energy, serves to cover over the simple fact that the work of saving the planet is political, not technical. We have a much better chance of making it past the 22nd century if environmental regulations are designed by a team of people with no formal education in a democratic socialist society than we do if they are made by a team of the most esteemed scientific luminaries in a capitalist society. The intelligence of the brightest people around is no match for the rampant stupidity of capitalism.

On the defensive for centuries, socialists have become quite adept at responding to objections from people for whom the basic functions of life seem difficult to reproduce without the motive power of capital. There are real issues here, issues that point to the opacity of sociability, as Bini Adamczak’s recent book, “Communism for Kids,” playfully explores. But the burden of justification should not fall on the shoulders of those putting forward an alternative. For anyone who has really thought about the climate crisis, it is capitalism, and not its transcendence, that is in need of justification. And don’t be surprised, or fooled, when its defenders point to the tireless work of intelligent people.