THE MADHOUSE EFFECT OF CLIMATE DENIAL... 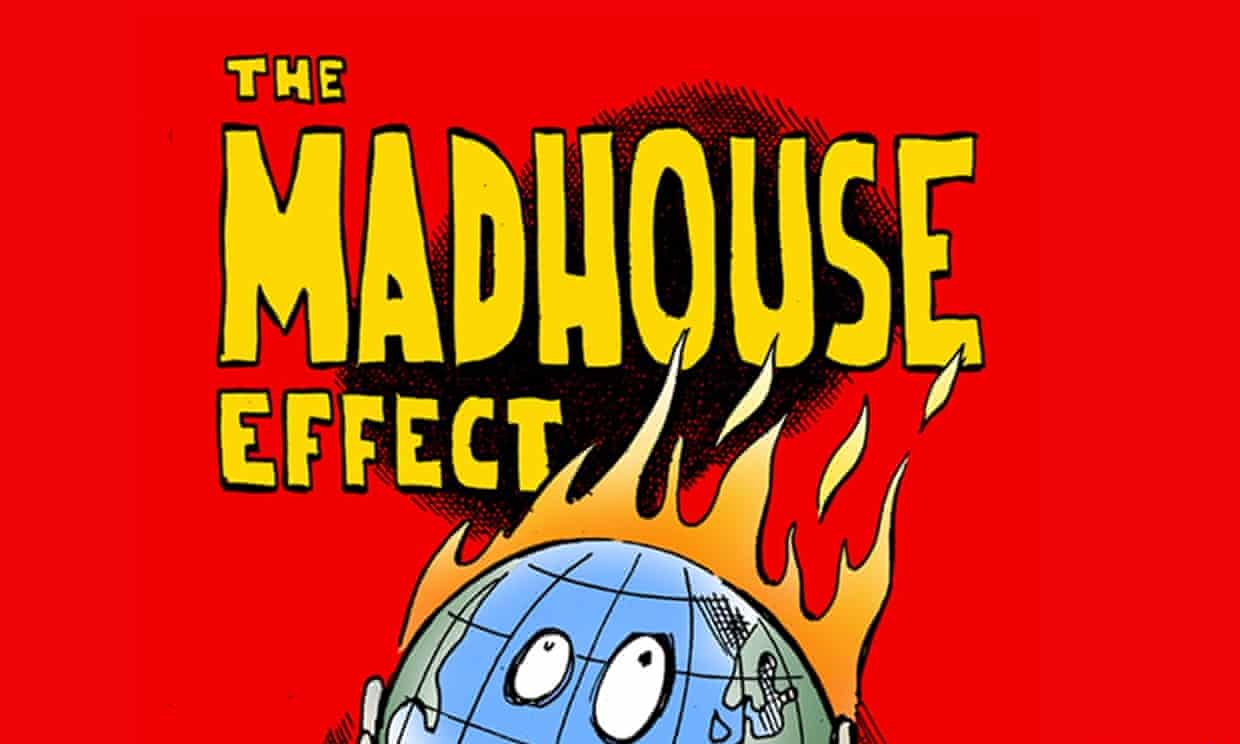 A new book by Mann and Toles explores climate science and denial with clarity and humor...

A new book by Michael Mann and Tom Toles takes a fresh look on the effects humans are having on our climate and the additional impacts on our politics. While there have been countless books about climate change over the past two decades, this one – entitled The Madhouse Effect - distinguishes itself by its clear and straightforward science mixed with clever and sometimes comedic presentation.

In approximately 150 pages, this books deals with the basic science and the denial industry, which has lost the battle in the scientific arena and is working feverishly to confuse the public. The authors also cover potential solutions to halt or slow our changing climate. Perhaps most importantly, this book gives individual guidance – what can we do, as individuals, to help the Earth heal from the real and present harm of climate change?

To start the book, the authors discuss how the scientific method works, the importance of the precautionary principle, and how delaying actions have caused us to lose precious time in this global race to halt climate change. And all of this done in only 13 pages!

Next, the book dives briefly into the basic science of the greenhouse effect. Readers of this column know that the science of global warming is very well established with decades of research. But some people don’t realize that this research originated in the early 1800s with scientists such as Joseph Fourier. The book takes us on a short tour of history. Moving beyond these early works that focused exclusively on global temperatures, the authors come to expected impacts. They explain that a warming world, for instance, can be both drier and wetter!

This seeming paradox is a result of our expectation that areas which are currently wet will become wetter with an increase in the most-heavy downpours. A great example is the flooding this year in the Southeast United States. The reason for this is simple: a warmer atmosphere has more water vapor. In other areas – especially those already dry - it will become drier because evaporation will speed up. If there is no available moisture to enter into the atmosphere (i.e. an arid region), then the result is more drying. Using their candid, humorous, and clear language, the authors also discuss impacts on storms, hurricanes, rising oceans, and so on.

With the basic science covered, the authors quickly move into reasons why readers should care. Many of the big risks climate change presents are covered. Included here are security, water availability, food production, land use and availability, human health, and risks to the world economies and ecosystems. Simply put, these are not future and abstract risks. They are current risks that are becoming more severe and will affect all of us.

The chapter that was most interesting to me was the stages of climate denial. The first stage is “it’s not happening,” where outright denial of the reality of climate change was discussed. The authors use an example of this stage which came from the climate contrarians Roy Spencer and John Christy, who claimed that the Earth wasn’t warming.

Technically, Christy and Spencer claimed that a part of the Earth’s atmosphere was cooling – in contrast to mountains of contrary evidence from around the globe. It was discovered that these contrarians had made some elementary errors in their calculations. When those calculations were corrected, their results fell into line with other research. I’ve written many times about the many errors from contrarian scientists – certainly not limited to Christy and Spencer. Within the scientific community, the contrarians have made so many technical errors that their work is no longer taken seriously by many scientists. But this hasn’t stopped the denial industry from showcasing their work, even though it is discredited.

The next stages of denial involve admissions that climate change is happening but that it is natural, it will self-correct, or it will climate change will benefit us. The tale of mistakes made in the science underlying these arguments is told in the book, and would be humorous if not so serious. The tales involve cherry-picked data, resigning editors, and other mistakes. For readers who may be concerned about getting lost in the weeds, don’t worry. The authors do an excellent job hitting high points in an intelligible manner so that readers don’t need a PhD in climate science to see the patterns.

Next, the book covers the denial industry including some of the key groups and persons who were responsible for a systematic rejection of the prevailing scientific view, or at least insidious questioning so that in the public’s mind there would be no consensus. This effort which not only denied the causes and effects of climate change, but also the health risks of tobacco was coupled with funding to scientists, “petitions” designed to appear as if they originated from the National Academy of Sciences, and an interconnected network of funded think tanks.

One result of all of this is that actual scientists who spend their lives studying the Earth’s climate have been attacked. One of the authors of this book (Michael Mann) is perhaps in the world’s best position to tell this tale because he personally knows many of the scientists who have been attacked professionally and personally, including the late Stephen Schneider, Ben Santer, Naomi Oreskes, and himself.

I have had the fortune of knowing these scientists and I can attest that they (and others) go into this field because they have an intense curiosity. Scientists want to know how things work and why. A side benefit is our understanding can give us guidance about the future. I don’t know of a single scientist who went into this field either for money or ideology. It’s shocking to be attacked for wanting to know, or for doing our jobs and telling the public about the scientific implications of our actions.

The book finishes by moving to the main political persons and groups that now populate the contrarian landscape. These groups and persons either continue the attacks on scientists, fund the denialist groups, or try to claim that taking action on climate change will do no good. The book finishes with the fallacy of geoengineering – which is seriously being considered and contrasts geoengineering with practical things individuals can do to make a difference.

What’s great about the ending is that often times, when the science becomes clear, people raise up their hands in submission, “what can I do about this problem?”. Well there are things we can do, either as individuals or as a community. Together, we can make a difference, bend the curve of emissions and create a better future for all of us.