THE WINTER OF BLAZING DISCONTENT CONTINUES IN THE ARCTIC...

These are some of the words that describe what’s been happening in the Arctic over the past year as surge after surge of warm air have stalled, and at times reversed, sea ice pack growth. And the unfortunate string of superlatives is set to continue this week.

Arctic sea ice is already sitting at a record low for this time of year and a powerful North Atlantic storm is expected to open the flood gates and send more warmth pouring into the region from the lower latitudes. By Thursday, it could reach up to 50°F above normal. In absolute temperature, that’s near the freezing point and could further spur a decline in sea ice.

Scientists have said the past year in the Arctic is “beyond even the extreme” as climate change remakes the region. Sea ice hit a record low maximum last winter (for the second year in a row,  no less) and the second-lowest minimum ever recorded last fall. After a fairly rapid refreeze in late September, the region experienced a dramatic shift. Extraordinary warmth has been a recurring theme.

Sea ice growth reversed in November. Temperatures reached the melting point at the North Pole in December. Preliminary data from January indicates the Arctic was up to 35°F above normal in some locations, including a mid-January mild wave.

That brings us to early February, which is setting up for another bout of mild weather in the Arctic... 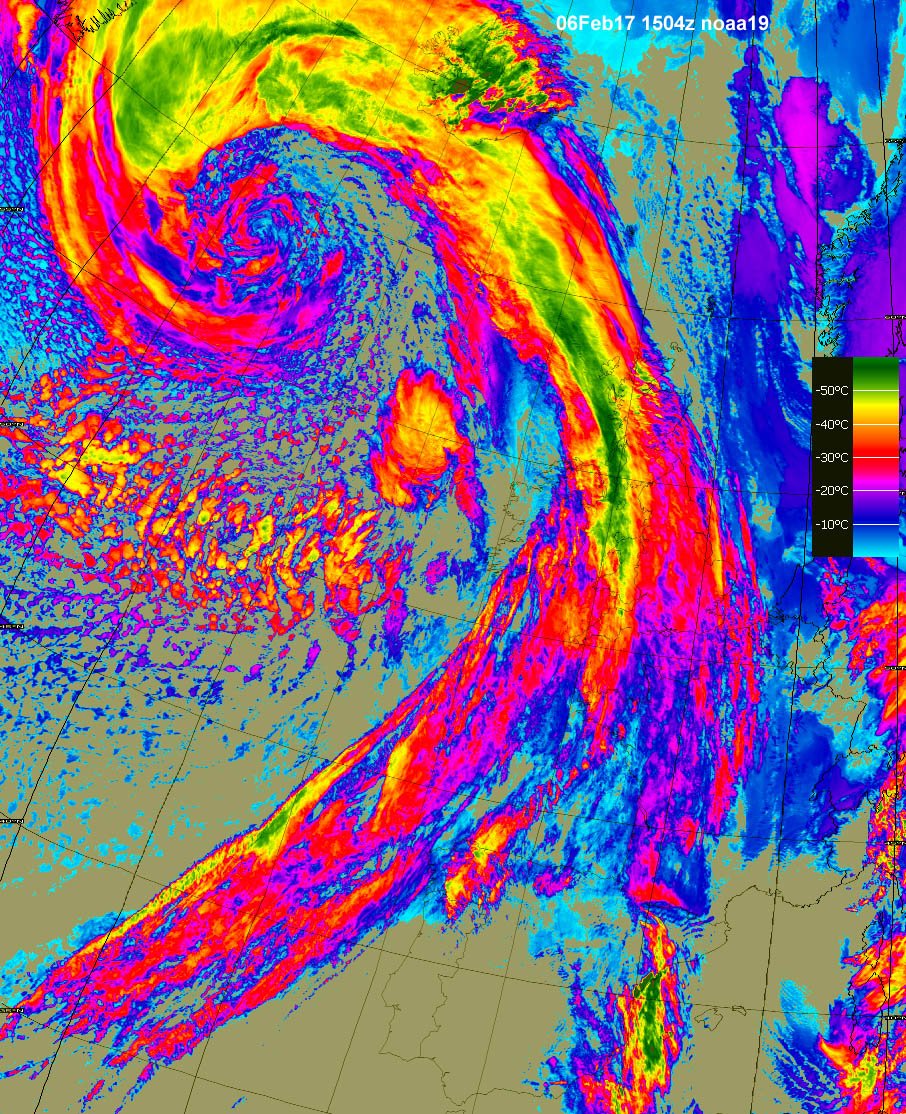 HRPT providing an excellent visual (http://www.woksat.info/wos.html ) of the powerful storm, which will result in moisture/heat transport into Arctic

A massive storm is swirling toward Europe. It’s a weather maker in itself, churning up waves as high as 46 feet and pressure dropping as low as is typical for a Category 4 hurricane as of Monday. The storm is to the southeast of Greenland and its massive comma shape has made for stunning satellite imagery. The storm is expected to weaken as it approaches Europe, but it will conspire with a high pressure system over the continent to send a stream of warm air into the Arctic through the Greenland Sea.

It’s just the latest signal that the Arctic is in the middle of a profound change. Sea ice extent has dropped precipitously as has the amount of old ice, which is less prone to breakup. Beyond sea ice, Greenland’s ice sheet is also melting away and pushing sea levels higher, large fires are much more common and intense in boreal forests and other ecosystem changes are causing the earth to hyperventilate.

Together, these all indicate that the Arctic is in crisis. It’s the most dramatic example of how carbon pollution is reshaping the planet and scientists are racing to understand what comes next.