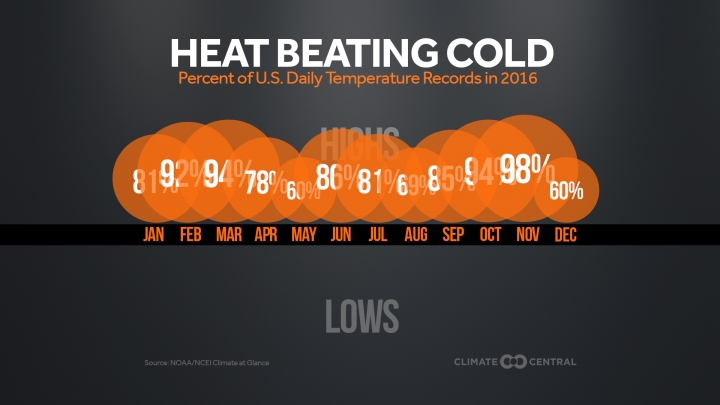 2016 will be remembered for many things. One of them will be heat...

It was the hottest year on record globally. While the world is still waiting for confirmation of just how high the record was, there’s a lot of data to digest from the U.S. Nearly every square inch of the country was dramatically warmer than normal.

The blistering pace of record-high temperatures across the country is the clearest sign of 2016’s extreme heat. Record-daily highs outpaced record-daily lows by 5.7-to-1 in 2016, according to preliminary data from the National Centers for Environmental Information. That’s the largest ratio in 95 years of record keeping. Put another way, 85 percent of extreme temperature records set in 2016 were of the hot variety.

That fits with the fact that 2016 will be the second-hottest year on record for the U.S. during which 98 percent of weather stations had a warmer-than-normal year.

More record highs than record lows is exactly what you’d expect in a warming world and the trend has been tipping toward more and more highs compared to lows for decades. The 2010s are on track to have the highest ratio of record highs to record lows of any decade on record. The decade is currently on pace to see highs beat lows by roughly 2-to-1. (Without climate change, you would expect the ratio to stay 1-to-1.)

That includes a stretch of 25 months in a row where record highs outpaced lows. According to Guy Walton, a meteorologist who tracks the NCEI numbers, it’s the longest such stretch since accurate record keeping of daily weather stats began in 1920.

If carbon pollution keeps increasing, temperatures will rise and make the ratio even more lopsided. Recent research shows that by midcentury, the ratio could reach 15-to-1 if carbon pollution continues on its current track. That means summers could have more days where it’s unsafe to be outside. Winters could also have more mild days, which sounds nice in theory, but could unleash a host of negative impacts from hurting communities that rely on winter tourism to affecting maple syrup production.

So while 2016 holds the title for the wildest record ratio, it’s only a matter of time until it gets beat.

You May Also Like:
Where to Follow the Climate Action in 2017
Heat Is On for 2017, Just Not Record-Setting
Four Critical Energy Issues to Watch in 2017
These Are the 10 Most Important Climate Stories of 2016