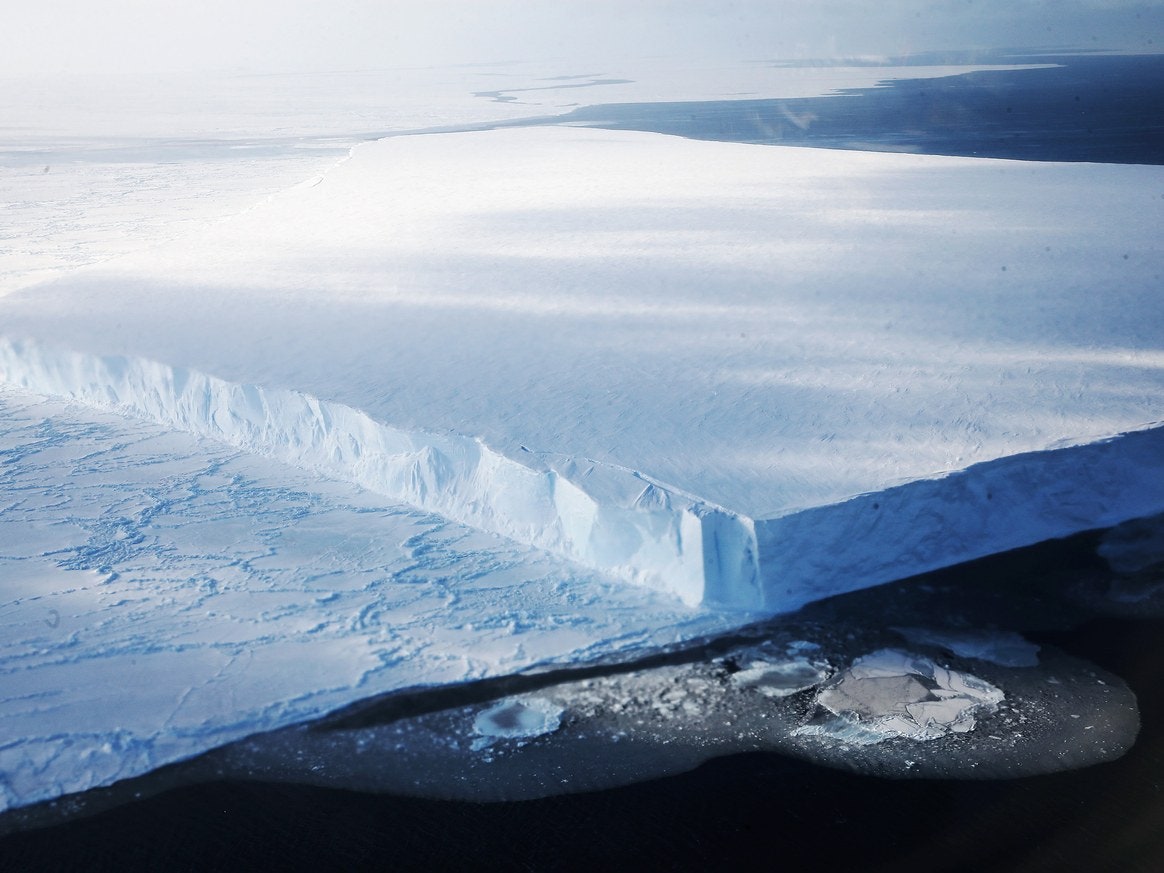 An iceberg floats off the coast of West Antarctica as seen by NASA Operation IceBridge airplane on October 27, 2016.Mario Tama/Getty Images

Last March, a paper by a geoscientist named Rob DeConto came out in Nature. And as far as geology papers go, it was a big deal: It outlined a new paradigm for how Antarctic ice sheets are impacted by climate change. As the oceans and atmosphere warm, they don’t just melt the ice from below; they create honking cracks in glaciers that make it easier for large chunks of ice to break off, slip into the ocean, and disappear. The effects on sea level rise? They could be almost twice what scientists had predicted for the end of the century...

News of that paper soon landed on the desk of Jerry Brown, governor of California and fired-up proponent of climate change science. Now, he has convened a group of seven scientists, including DeConto, to sift through that study and other recent research to calculate new projections for sea level rise—and, importantly, think about what it could mean for California’s coast. Over the next three months, the team will read, discuss, and synthesize. Eventually, they’ll arrive at numbers. And those numbers will have huge implications for the Golden State’s infrastructure, planning, and the budgets that support them.

In part, Brown formed this committee because an earlier report on sea level rise, just five years old, might already be out of date. The governors of California, Oregon, and Washington commissioned that report in 2010 to describe how sea level rise would affect the west coast in 2030, 2050, and 2100. Since it was released in 2012, California agencies from Caltrans to the state energy commission have used it to make decisions about huge coastal investments and infrastructure, says Gary Griggs, an oceanographer at UC Santa Cruz who was involved with the report. He’s now leading the current committee.

The stakes are high, says David Behar, the climate program director for San Francisco’s public utilities commission. A few feet of sea level rise make a huge difference for shoreline mapping, say, to figure out what areas need to be protected from flooding. Planners not only need to consider the likely level of sea level rise in 2100 (the 2012 report put it around three feet) but also the 5.5 foot rise in the worst-case scenario, plus the 42 inches added by rare but massive storms. (Infrastructure planning isn’t the most optimistic of endeavors.) With prominent, heavily-trafficked locations like San Francisco’s Embarcadero and Oakland Airport just a few feet away from sea level, the cost of a few extra feet of ocean could be billions of dollars.

Planners have developed ways to design around this uncertainty. The best way, says Robert Kopp, a climate scientist at Rutgers, is to make choices so that you don’t accidentally box yourself into a corner 20 years down the line. For example, if you’re building a levee around an island, you plan for 16 inches of rise because that’s what the projections are for 2060. But you leave yourself room at the base of the levee so that, if the numbers are wildly different decades later, you can add to the levee without having to tear anything down. “It’s a classic modular approach,” Behar says.

That strategy works, to a certain extent. But wildly divergent projections—say, a hike of a few feet in sea level—can change not only the degree of preparation, but the types of structures a planner decides to build. Do you shore up a coastline by building concrete seawalls, or mounded dirt levees, or wetlands with vegetation to catch the water? Wetlands are popular in the Bay Area, but they become much less effective if water levels get a couple feet higher.

To help the state make the best infrastructure decisions, the working group needs to decide whether DeConto’s study, and the other research that’s come out recently, is important and robust enough to throw out the old numbers. Nowadays, the climate science community is producing projections at a rapid clip, says Helen Fricker, a glaciologist at the Scripps Institution of Oceanography. But when do new findings supersede the old ones? “The panel needs to decide if this new land ice model is cutting-edge science or consensus science,” says Behar.

Then there’s the gap between arriving at sea level projections and actually translating them into good planning decisions. Typically, climate change guidance goes like this: The state funds scientists to study the literature, puts their findings on a website, and then tells planners to have at it. “This is a uniquely unsuccessful model,” says Behar. The reports are hard for the average person to understand, much less make huge decisions that require taxpayer money. Behar used that 2012 report for his planning, but “it was deeply flawed,” he says. Some parts were unintelligible to anyone without a PhD in oceanography or atmospheric chemistry.

Ideally, planners and scientists would work closely together to produce recommendations for dealing with sea level rise. And as the ocean begins lapping further inland, this close involvement will become more and more important to keep up with the quick pace of sea level rise, the research on it, and the inherent uncertainties in both. “In the end, even if climate change is global, adaptation is all local,” says Kopp. And it’s local efforts like California’s committee that are tackling the problem head on.