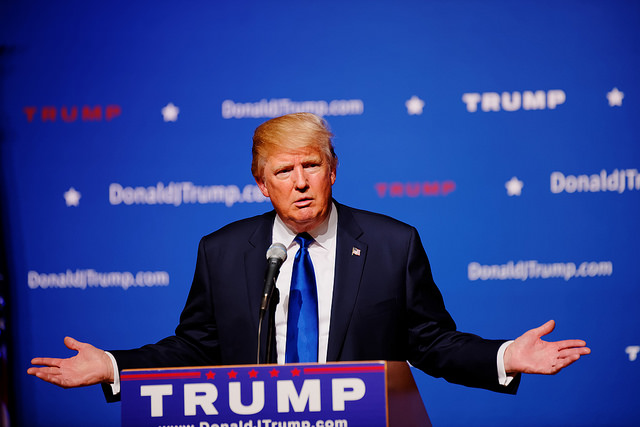 Experts say low natural gas prices are the biggest cause of coal’s downturn...

If there was any doubt that energy and climate change would loom large in the coming presidential election, that was dispelled when Donald Trump gave his first major energy speech last week – on the same day that he cinched his nomination.

He could not have picked a friendlier setting for his speech than Bismarck, North Dakota, a hub of the oil and gas industry. Trump vowed to reinvigorate the nation’s energy businesses, particularly coal mines, which have seen dramatic declines in recent years, triggering layoffs of tens of thousands of miners.

Trump also asserted that he would reduce regulations on hydraulic fracturing, or fracking, the engineering technique that has helped spark a resurgence of the U.S. oil industry in recent years.

But many economists and industry experts caution that there’s a central contradiction in Trump’s vision. He pledges to revive the coal industry, and at the same time boost the main culprit that has eviscerated coal, natural gas. “It’s really what’s eating coal’s lunch in the United States,” says Susan Tierney, a Denver-based industry consultant and former assistant secretary of the U.S. Energy Department. “It is nonsensical for him to claim that he can undo the market forces that are undermining the coal industry today.”

Trump’s energy policies stand in stark contrast to the visions of Democrats Hillary Clinton and Bernie Sanders. Both promote big shifts towards wind and solar power and argue that keeping more coal in the ground is an important way to fight climate change. Sanders has promised to work towards a national ban on fracking.

In North Dakota, Trump contrasted his energy policies with Clinton’s, lambasting a comment she made to CNN in March that she would put coal miners out of business. She later apologized to miners during a campaign stop in West Virginia. “She’s worse than Obama,” Trump said. As he has in the past, Trump blamed the Obama administration’s environmental rules for the coal industry’s suffering.

When a reporter pressed him about how he planned to bring back coal jobs, he stressed that he would do so by getting rid of regulations.  “You know, all I can do is free up the coal, which I'm going to totally do. Get the companies back to work, market forces, that's something I don't want to get involved in… To me, a market force is a beautiful force,” Trump said.

But economists and energy experts counter that easing regulations would not be enough to reinvigorate coal, especially not if Trump removes regulatory impediments to natural gas at the same time. That’s because, so far, Obama-era regulations, such as the Mercury Air Toxics rule, have played a secondary role in coal’s precipitous downward trajectory.

Even coal industry CEO Robert Murray – whose company Murray Energy Corp. owns mines in Utah, Ohio, Illinois, Kentucky and West Virginia – says he explained this to Trump in a recent meeting with the candidate. "He wants to bring the mines back and I told him that was not possible," Murray told S&P Global Market Intelligence, a research company that publishes market analyses. "I don't think it will be a thriving industry ever again… The coal mines cannot come back to where they were or anywhere near it."

(Some experts counter that these regulations are in part about saving society money by preventing coal-related air and water pollution, which result in medical and clean up costs. Tierney also points out that Trump says he wants to bring back coal and also protect clean water and clean air – a further contradiction.)

President Obama’s Clean Power Plan, designed to reduce greenhouse gas emissions from the electricity sector nationwide, would be expected to hurt coal. The Supreme Court stayed that rule pending review, but Namovicz says the prospect of that rule also may be adding to coal’s current troubles.

However, some economists are convinced that low natural gas prices have played the dominant role in coal’s slide. There’s a strong correlation between falling gas prices and the decline in coal production. What’s more, while you can blame the retirements of some older coal plants on regulations, it’s harder to fault regulations for the day-to-day decisions of grid operators to increasingly opt for natural gas instead of coal. Two economists, University of Colorado associate professor Daniel Kaffine and North Carolina State associate professor Harrison Fell, have been crunching data from every fossil-fueled power plant in four different regions of the country. They’re trying to quantify the relative roles that low-cost natural gas and the rise of solar and wind have played in coal’s negative trajectory.

They found in most of the regions studied that natural gas prices played a dominant role, and the growth of wind played a sizable secondary role. Regulations trail both.

“Banning fracking would be one mechanism to make coal competitive,” says Kaffine. But instead, Trump promises to remove regulations for natural gas too. “That’s just going to put even more downward pressure on coal.”

So the coal industry is still waiting to hear from Trump about how he would bring back jobs. Luke Popovich, a spokesman for the National Mining Association, says, “I certainly would like to hear some details on what exactly a new president might do to undo regulations that are impacting coal, let alone what he might do in the marketplace to restore employment.” He adds, “I don’t think anyone is satisfied that he has a plan to achieve what he promises.” On that, there seems to be widespread agreement.