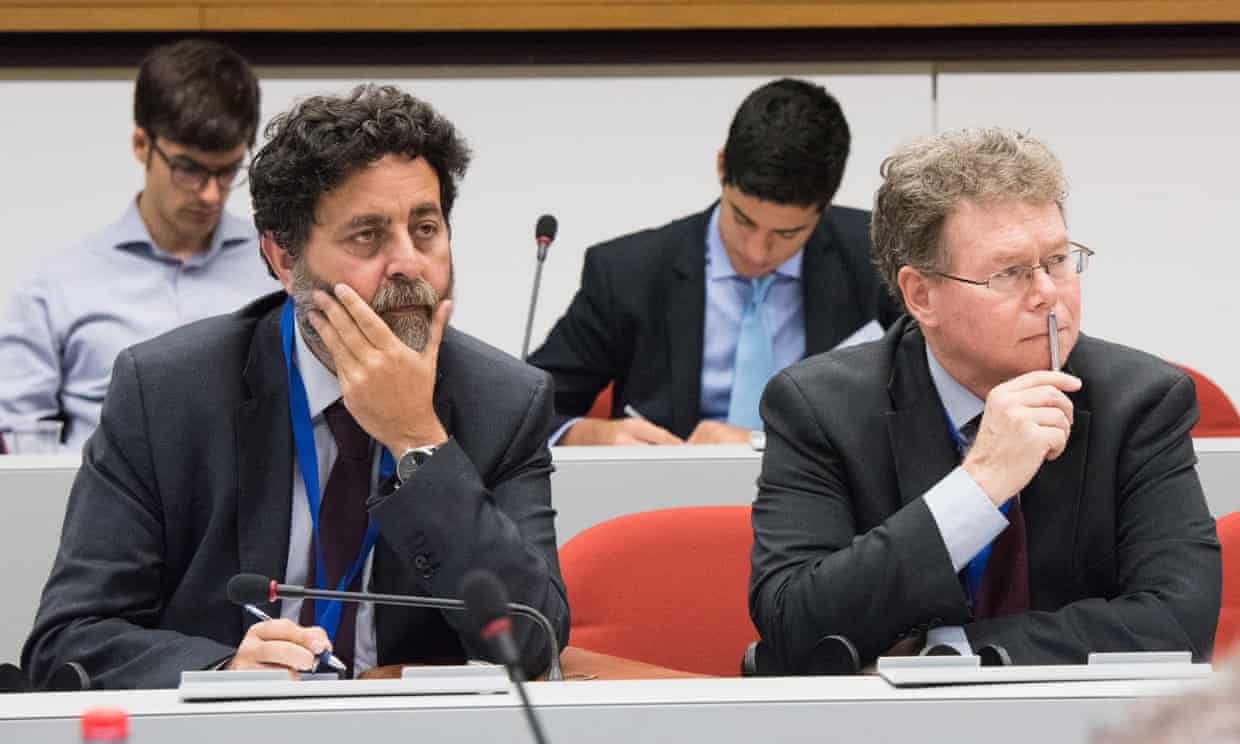 Dan Mullaney, chief US TTIP negotiator (R) and Ignacio Garcia Bercero, his EU counterpart at the 14th round of the TTIP talks in Brussels, 11 to 15 July. Photograph: Lieven Creemers/EC Press office

Draft proposal reveals new loopholes on a pledge to phase out fossil fuel subsidies within a decade...

Trade negotiators in Brussels are proposing new loopholes on a G20 pledge to phase out fossil fuel subsidies within a decade, in the latest leaked TTIP proposals seen by the Guardian.

The EU’s draft text for a trade and sustainable development chapter also appears to draw an equivalence between the need to prevent trade distortions and the fight against climate change.

The leak will provide fresh ammunition to critics of the Transatlantic Trade and Investment Partnership (TTIP) free trade deal, who fear that its provisions could undermine hard-won climate commitments.

One of these was a pledge in May to phase out inefficient fossil fuel subsidies by 2025 – which currently run at $10m (£7.5m) a minute – by G7 ministers at a summit in Japan.

The EU’s proposal will be discussed in a 14th round of TTIP negotiations currently underway in Brussels. It says that both the EU and US share the goal of phasing out such subsidies, where this “encourages wasteful consumption”.

But “such a phasing out may take into account security of supply considerations and be accompanied by measures to alleviate the social consequences associated with the phasing out,” the proposal says.

Critics of the TTIP deal see “security of supply considerations” as a get-out that could be liberally invoked by fossil-fuel dependent countries, while action to ease the ending of fossil fuels largesse could be a potential new subsidy in disguise.

Colin Roche, a spokesman for Friends of the Earth Europe, described the climate provisions in the text as “an ineffective fig leaf” for a destructive trade deal.

It restates existing commitments to the Paris climate deal and pledges to facilitate the trade in environmental goods and services.

However, in the document’s Article 5, it also says that: “When developing public support systems, the Parties will take proper account of the need to reduce greenhouse gas emissions and to limit distortions of trade as much as possible.”

Much hinges on how the proposal is interpreted. It could be used to help families in energy poverty, and maintain baseload electricity production while renewable sources are coming online, according to Guntram Wolff, the director of the Bruegel thinktank in Brussels.

However, “both clauses are sufficiently vague that there may be significant risks of their being misused,” he said. “It’s hellishly complicated with 28 countries having 28 different concerns. In the end, it will as always boil down to making sure that it is not misused, and that is very difficult.”

Cécile Toubeau, a member of the European commission’s TTIP advisory panel, and the Transport and Environment campaign group, saw goodwill in the text, even if there were also devils in its detail.

She said: “If TTIP wants to be set the global ‘golden’ standards it should tackle production fossil fuel subsidies, a highly trade distorting instrument, in a legally binding chapter. Without a concrete timeframe to end fossil fuel subsidies, it will be impossible to stop our oil addiction and therefore uphold the Paris deal.”

A spokesman for the European commission said: “TTIP is not about increasing the amount of fossil fuels that Europeans use. It fits into the EU’s broader strategy of finding different, cleaner sources for the energy that we need. It will do this by removing barriers to the trade in energy between ourselves and our ally, the United States.”