UNCHECKED ARCTIC MELTING: HOW SOME COMMUNITIES ARE STARTING TO ADAPT... 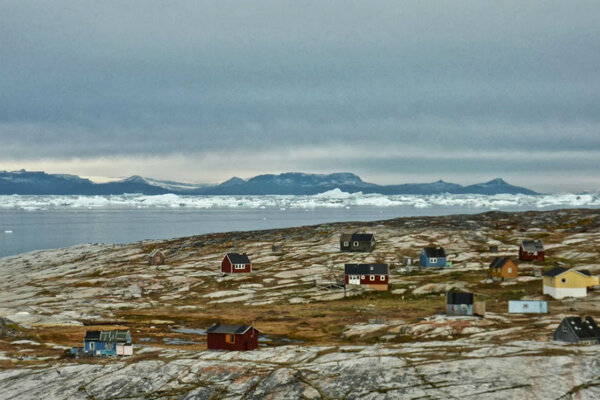 An Inuit village in Greenland is pictured in this September 2013 handout photo provided by Ida Moltke. New research by the Arctic Council shows how unprecedented high temperatures and rapid ice melt in the Arctic are driving communities to tipping points of survival. Ida Moltke/Handout/Reuters/File

A new report by the Arctic Council shows how unprecedented high temperatures and rapid ice melt in the Arctic may pass a tipping point and force adaptation...

The Arctic ecosystem may be heading toward permanent change as high temperatures and longer summers continue to alter the region, according to a report published by the Arctic Council on Friday.

In the first comprehensive assessment of ecosystems and societies in the region, the Arctic Resilience Report highlights how human activities and global warming may have caused some ecosystems to reach key tipping points, thus threatening the way of life and economies of local communities.

“Climate change is severely stressing Arctic livelihoods and people, and the extent to which Arctic people can build resilience to these stresses is quite limited,” Miriam Hultric, lead author of the report said in a press release. “Without rapid action to slow climate change by reducing greenhouse gas emissions, the resilience of the Arctic will be overwhelmed.”

Recommended: Climate change: Is your opinion informed by science? Take our quiz!

The changes set in motion by global warming were particularly pronounced this year, with the lowest sea ice level recorded in both the Arctic and Antarctic and the highest average global surface temperature occurring from January to June, with some Arctic islands experiencing above freezing average annual temperatures for the first time on record. As past research has shown that such changes are amplified in polar regions, scientists are concerned about local communities’ ability to survive the changes brought by global warming.

“Arctic ecosystems are changing in dramatic ways: ice is melting, sea levels are rising, coastal areas are eroding, permafrost is thawing and landscapes are changing as the range of species shift,” the authors wrote in the report. “Resilience enables people and ecosystems to cope with the shocks and stresses associated with these changes … Yet some changes are so substantial … that they fundamentally alter the functioning of a system.”

The authors examined 19 ecological tipping points - called “regime shifts” - that have or can be crossed in the region. This includes a shift to sea ice-free summers, collapse of Arctic fisheries, and transformation of landscapes from bogs to peat lands, from tundra to steppe, thus threatening the subsistence lifestyle of the Arctic people who depend on plants and animals that may no longer survive in this new climate. For instance,  mass reindeer deaths due to weather events in the last decade has affected livelihood of traditional Arctic herders.

“One of the study’s most important findings is that not only are regime shifts occurring, but there is a real risk that one regime shift could trigger others, or simultaneous regime shifts could have unexpected effects,” said Johan L. Kuylenstierna, executive director of the Stockholm Environment Institute.

A couple of drivers of change, including fishing, tourism and resource exploitation were identified, but the authors say human-induced climate change from outside the Arctic such as burning of fossil fuels is a key factor.

From Canada to Iceland, some Arctic communities reliant on traditional whaling and reindeer herding have already adapted to the new normal, the report shows, moving away from their role as nomadic hunters. In Cape Dorset, Nunavut, Canada, for instance, they became internationally recognized artists, while those in Husavik, Iceland, began organizing whale-watching tours.

“For those of us in the policy arena, this provides an important reminder that empowerment and training for Northern communities is paramount for addressing resilience in the region,” Joel Clement, co-chair of the project and the Director of the Office of Policy Analysis at the U.S. Department of the Interior said. Other factors that encourage resilience include “the ability to draw on diverse knowledge sources, including local traditions as well as science; having diversity (e.g. in livelihoods); and being able to navigate change and uncertainty.”

Carbon emission policy decisions and collaboration between the diverse countries in the Arctic are identified as key factors that could help people in the region survive, with the authors emphasizing the need for coordination between diverse Arctic countries’ governments, non-governmental organizations, industry, and the Arctic people.

“Ultimately, realizing resilience in the Arctic will depend on empowering the people of the North to self-organize, define challenges in their own terms, and find their own solutions, knowing that they have the flexibility and external support to implement their plans,” the report concludes.

Zhai Yun Tan (Nat) joined the Monitor in September 2016 as a Rapid Response Intern. She graduated in December 2015 with a B.A. in journalism and minor in environmental studies from University of North Carolina at Chapel Hill. Originally from Malaysia, she enjoys observing American culture, analyzing current issues in the United States and learning the ins and outs of American journalism.