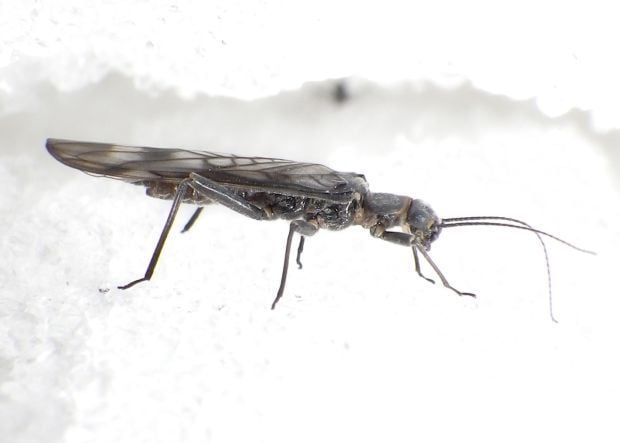 The western glacier stonefly and the meltwater lednian stonefly live primarily in streams fed by cold water from glaciers and snowfields.

In Glacier National Park, those glaciers are predicted to largely disappear by 2030. Researchers say the stoneflies could follow suit, in a case that underscores the vulnerability to warmer temperatures of animals and plants in mountainous areas of North America.

"They're indicative of the health of the alpine community," said Jonathan "Joe" Giersch, a scientist with the U.S. Geological Survey tracking the stoneflies' decline. "The glaciers really are the water towers for the continent. That affects not just the fish but other aquatic species in river and steams, and not just in high alpine areas but down in drainages."

A final decision on whether to add the insects to the government's list of threatened species is expected within about a year, the U.S. Fish and Wildlife Service said.

New populations of what are believed to be the western glacier stonefly were recently discovered in the Beartooth Mountains of Montana and Wyoming's Grand Teton National Park. Despite that news, wildlife officials said the threat posed by climate change and periodic drought could drive both kinds of stonefly toward extinction.

By 2030, the amount of stream habitat available to the meltwater lednian stonefly is expected to decrease more than 80 percent. Similar declines in habitat are projected by the western glacier stonefly.

It's uncertain what measures could be taken to preserve the insects. There have been preliminary discussions among biologists about raising stoneflies in laboratories and seeding different streams with them.

But those streams also could dry up as climate change drives global temperatures higher.

Monday's announcement came after two advocacy groups, Wildearth Guardians and the Center for Biological Diversity, petitioned the federal wildlife service to consider protections for the insects. The groups reached separate legal settlements with the government in recent years that required wildlife officials to decide on the status of the two insects and hundreds of other species across the U.S.