USING SCIENCE TO SEE WHICH COUNTRIES ARE FOLLOWING THROUGH ON PARIS CLIMATE CHANGE GOALS... 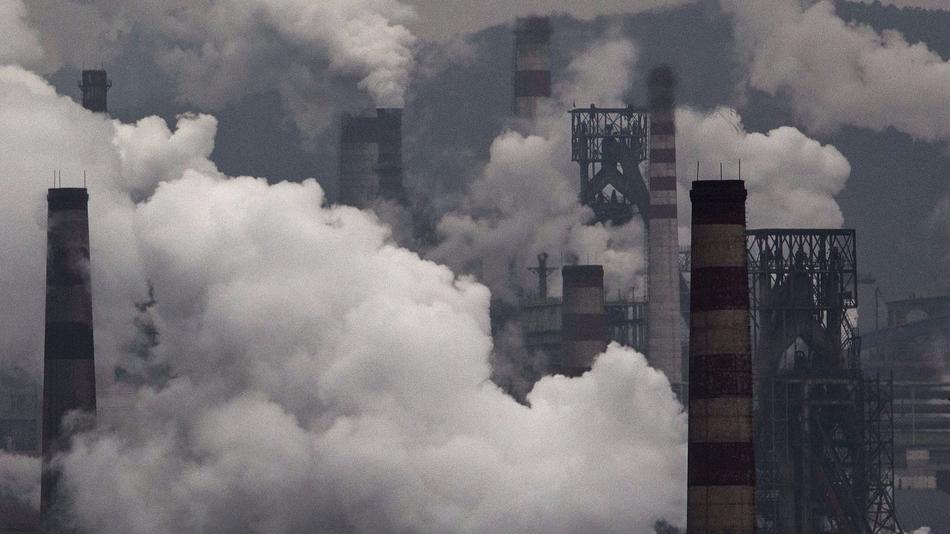 Smoke billows from smokestacks and a coal-fired generator at a steel factory in China. Scientists have developed a new method for tracking countries' compliance with the goals set forth in the Paris Agreement. (Kevin Frayer / Getty Images)

If the United States and its fellow Paris Agreement signatories are to meet global climate targets, they’re going to have to make serious commitments that attack the problem on multiple fronts, including reducing coal use, raising renewable energy, accelerating carbon-capture technologies and electrifying more of our automotive fleet, a new analysis shows...

A study last week in Nature Climate Change has developed a measurement tool that can be used to assess each nation’s performance, helping to keep them accountable while also pinpointing the economic and policy changes they can make to meet the those climate targets.

“Many key indicators are currently broadly consistent with emission scenarios that keep temperatures below 2◦ C, but the continued lack of large-scale carbon capture and storage threatens 2030 targets and the longer-term Paris ambition of net-zero emissions,” the study authors wrote.

The Paris Agreement, signed by 192 states plus the European Union and ratified by 128 of those parties, marked a historic first – committing practically every country to slashing the greenhouse gas emissions that are responsible for climate change. The goal of the agreement is to keep global temperatures from rising no more than 2 degrees Celsius (3.6 degrees Fahrenheit) by 2100, in order to avoid the worst of climate change’s most catastrophic impacts.

Each nation can pursue its own efforts to reach that goal. For example, President Obama committed the United States to reducing its greenhouse gas emissions by 26% to 28% (compared to 2005 levels) by the year 2025.

But how can scientists measure whether individual nations are holding up their end of the bargain and truly doing their best to reduce their effect on global warming? Without knowing what’s working and what isn’t, it’s hard to craft effective policy.

Figuring this out is actually a really tricky problem, said study coauthor Robert Jackson, an Earth scientist at Stanford University and co-chair of the Global Carbon Project.

The new analysis consolidates that information by using what’s known as the Kaya Identity, an equation used by the Intergovernmental Panel on Climate Change to make climate change projections based on greenhouse gas scenarios. Here, though, Jackson and his colleagues applied their methods on an individual country-level basis, sifting through and incorporating information from each nation.

The Kaya Identity links carbon emissions to their causes, including population, economic growth per capita, and improvements in energy efficiency and ‘low-carbon’ energy, for example.

The scientists found that the recent slowdown in global emissions growth is due in large part to the reduction in the growth of coal use since 2011 – first in China, and then the United States. In the last two years in the U.S., Jackson said, electricity generated by coal has dropped by roughly a quarter – a shift powered in large part by natural gas.

“This last year, 2016, was the first year ever that we produced more electricity using natural gas than with coal,” Jackson said. “That’s the first time that’s ever happened in the United States.”

Wind and solar power growth, driven in part by policy, has also helped, he added.

“Renewable portfolio standards in more than 30 states that are prompting record build-out in wind and solar,” he said.

Much of the improvements have been due to better efficiency standards both for buildings and in industry.

If the U.S. is going to make those Paris goals, however, it will probably need to pick up the pace, Jackson said.

Trump administration moves make scientists nervous. Here's what they're planning to do about it...

“Even in countries where those emissions are dropping like in the U.S., they need to drop faster if we’re to reach our Paris commitment,” he said.

The U.S. will have to “electrify” more of its vehicles – which altogether produce more than a quarter of the country’s greenhouse gas emissions. The more that natural gas is able to replace coal, the better.  And it will have to bring affordable large-scale carbon capture and storage technologies to the market – though whether that is truly feasible remains to be seen, Christopher Green, an economics professor at McGill University who was not involved in the study, wrote in a commentary.

“Whether current trends are real or lasting, the elephant in the room is whether they can be levered up substantially without numerous energy technology breakthroughs,” Green wrote.

Green also pointed out that the study’s first author, Glen Peters, also led a study in 2015 that found that even if the U.S. and EU cut emissions by 80% or more by 2050, and if China takes a deep bite out of its emissions from 2030 to 2050, this would still not leave much, if anything, in the 2-degree-Celsius global emissions budget for the rest of the world’s nations. The 2015 Paris conference, he added, “ignored these warnings.”

“Is the world currently on track to meet the global climate challenge? It is difficult to be sanguine,” Green wrote. “Globally, the increase (from very low levels) in the relative share of non-hydro renewable energies (from 0.55% to 2.77% between 2000 and 2015) has been almost wholly offset by a 2.0 percentage point reduction in the share contributed by nuclear power. As a result, the share of fossil (carbon emitting) energy in global energy consumption has remained between 86% and 87%.”

Jackson was a little more hopeful, although he noted that in the near term, efforts to combat climate change could be hindered by a Trump White House.

“I’m an optimist; I guess you can tell that by now,” he said. “On the other hand, there are many things the current administration can and is likely to do to slow our progress to the Paris accord.”

Jackson ticked off actions that could hinder the progress made so far in the United States. President Trump could scuttle the EPA’s Clean Power Plan, as he has threatened to do, and could abandon improvements in vehicle fuel efficiency. They could do away with rules on energy efficiency and methane leakage for oil and gas operations – which Trump has also said he plans to do, Jackson added.

This could have consequences not just for the environment long-term, but for Americans’ well-being in the short term, scientists said.

“We have more than 10,000 people a year die from the pollution from our coal plants in the United States every year,” Jackson said. “It’s important to stress that a low-carbon economy not just reduces greenhouse gas emissions, it reduces air pollution, saves water; it ultimately saves human lives.”