You most likely have seen the news about the global warming aggravated weather like hurricanes Harvey, Irma and Marie or the horrible wildfires in northern California and the west coast. In this blog we have repeatedly provided good science informing that you that until we reverse our suicidal fossil fuel burning habits, global warming aggravated climate consequences (like what you are seeing almost everyday in the news,) will continue to increase in frequency, severity and scale...

We are now compelled to also inform you of a new reality about global warming that you will hear first in our blog. In the new book Climageddon it was strongly suggested that global warming may be irreversible at this time.

Due to additional new research, gross miscalculations by authorities, the worsening of average global warming temperature and the crossing of numerous bellwether tipping points, our organization now realizes, accepts and forwards the extreemely painful fact that global warming has now entered a new state of irreversibility. We will tell you more about what that means, but first we must put this horrible news into an appropriate context to help you prepare to respond to it.

Even though global warming has now reached irreversibility, we still have a significant amount of time left (about 10-15 years,) to prepare, adapt, and/or migrate where necessary to save humanity and civilization. It is also useful to think about irreversible global warming like a slow-moving, planet killing-sized asteroid about 10-15 years away from colliding with Earth. If we are smart and move quickly, we can still reduce and slow some of the coming consequences (i,e. try to change the asteroid’s course.) We can still control a good portion of the positive qualities of our lives, far longer than those individuals who ignore, deny, or are unaware of this disheartening new reality.

Irreversible global warming describes both the process of the earth’s average global temperature continually increasing as well as a distinct climate state created by the combination of increasing temperatures, crossed global warming tipping points, and multiple self-reinforcing positive feedback loops. These factors collectively cause the global climate to change until it reaches a new higher temperature that is irreversible in any timescale that is not far, far longer than the average human lifespan.

At the minimum, the relative time frame for sequestering (removing) the carbon particles we are now adding to our atmosphere is centuries. This, unfortunately, means that long after we stop polluting our atmosphere with fossil fuels, the 20 deadly consequences of those actions will last from centuries to thousands of years.

Why we have reached irreversible global warming

We are in this state of out of control and temporarily irreversible global warming because of:

a. the gross miscalculations by the UN's Intergovernmental Panel on Climate Change (the IPCC,) and 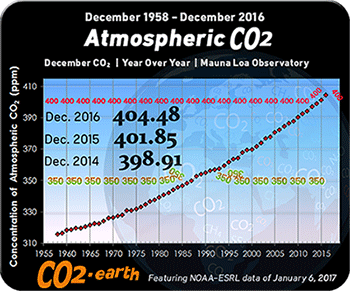 Viewing atmospheric carbon ppm measurements (above,) is the single best way to see both current and future global warming trends. Because of the laws of physics, if carbon keeps going up in the atmosphere, heat will increase and we are not making atmospheric carbon reduction progress --- no matter what you are hearing in the media!

It is already bad, and it is going to get much worse

As of October 2017 we have 404 carbon parts per million (ppm) in our atmosphere. Until 2016 we were creating an average increase of 3-4 or more carbon ppm each year. (October of 2016 carbon amounts were later adjusted down to carbon 402 ppm.)

There is also minor monthly up or down variations in carbon ppm levels as well cyclical weather variations due to things like El Nino or La Nina. In spite of such variations, the clearly dominant trend for the last 70 years is carbon ppm is rising faster and faster.)

At the carbon 425-450 ppm threshold (which we will hit in about 4-10 years) we will continue crossing more of the 11 critical global warming tipping points within the climate’s many systems and subsystems, but at an even faster rate!

Once we cross the carbon 500 ppm threshold (current carbon ppm emission rates would produce that range in about two dozen years) ALL ice and ALL glaciers on Earth will go into complete meltdown and the oceans will eventually rise by 70 meters (230 feet). This has happened repeatedly in Earth's geological history whenever carbon levels crossed this critical 500 ppm threshold.

There is no way to fix this because...

At the present time, we are at the beginning state of irreversible global warming because we also can’t stop carbon ppm levels from continuing to rise at about 3-4 ppm or more per year for at least another 30 - 50 years. This is due to the fact that we cannot quickly enough transform the world from being dependent upon dirty fossil fuel energy generation to employing clean green energy generation.

To better understand why we are already committed to irreversible global warming, it is important to look deeper into the term committed global warming. It means there is an already "baked-in" average global temperature increase between about 1.5° and 2.7° Celsius which the Earth has or will soon hit and that it too, will not change for centuries no matter what we do.

This is due in significant part to:

a. the existing momentum of carbon ppm already in the atmosphere,

b. the new carbon ppm per year that we will inevitably and invariably keep adding over the following 3-5 decades,

d. the unknown crossed or soon to be crossed new global warming tipping points and,

e. the necessity of re-compensating mathematically for the grossly unrealistic calculations by the UN’s Intergovernmental Panel on Climate Change based on their projections for a new “miracle technology” appearing in the second half of the 21st-century for the mass removal of carbon particles from the atmosphere. This "new miracle technology that will save us at the last minute" is a false hope and delusional groupthink distortion of the worst kind.

Unfortunately for us, it is this currently non-existent, and earnestly wished for  “miracle technology” that the IPPC’s 2015 Paris Agreement calculations rely most heavily upon to keep our future average global temperature increases below their unachievable target of 2° Celsius by 2100. The mathematical, scientific, and mechanical feasibility (to scale up the non-existent miracle technology adequately) as well as the unknown negative side effects of this non-existent, “miracle technology” have already been debunked by respected climate scientists like Kevin Anderson. This nonexistent new technology will not reverse our current irreversible global warming emergency, no matter how many times famous billionaire techno-optimists like Bill Gates suggest we must believe and trust that it is coming.

The dangers of delusionary groupthink on our survival

Most unfortunately of all, instead of telling the people of the world the difficult and necessary truth that we must immediately and radically cut back on fossil fuel usage to save both ourselves and future generations, the 2015 IPCC Paris agreement instead signaled, “Don't worry humanity, you don't have to give up your current comforts or, even make any fast, difficult or costly changes in your existing lifestyles and business practices.

A nonexistent new ‘miracle technology’ will magically appear in the next couple of decades which will allow us to suck all of those bad and toxic greenhouse gases out of the atmosphere and miraculously save us long after we have already gone way too far with fossil fuel emissions. This type of delusional groupthink and reliance upon a magical and miraculous new technologies is only appropriate in children’s fairy tales—-never for vital scientific projections, particularly when those projections are the very projections which humanity and our civilization are relying upon for planning our future survival.

How to keep this bad news in perspective

Because of the arrival of this new level of irreversible global warming, the processes for the extinction of humanity have accelerated. In spite of this bad news, keep in mind that if we are able to honestly face this new level degree of threat, and if we act now, we still have time to prepare, to adapt, and to save most of humanity and the best achievements of our civilizations. Moreover, we can also continue to live meaningful and enjoyable lives!

When you take into account all of the above facts concerning the causes and conditions behind why and how global warming has now become irreversible, other critical thinkers and critical thinking organizations will also soon see that we have entered a new state of irreversible global warming and that the global warming emergency has taken another step in the wrong direction. Unfortunately, that also condemns us to a set of disastrous consequences that will be illuminated in detail in future Global Warming Blog posts.

Want more information on our out of control and temporarily irreversible global warming and its causes?

Many of the gross miscalculations by the UN's Intergovernmental Panel on Climate Change and other factors that helped bring about irreversible global warming have been described in the new book Climageddon.

This editorial opinion/article provided by the research and editorial team at JobOneforHumanity.org, a not for profit organization educating about the global warming emergency. Please share or translate this blog post with whoever you think will benefit from it.  Attribution-NonCommercial 4.0 International Creative Commons rights apply.