Today, the 21st of September, is the United Nations International Day of Peace, a day devoted to non-violence, cease-fire, and making the ideals of peace robust.

What has world peace to do with global climate change? A helluva lot. Rapid global reduction of CO2 emissions requires world disarmament, a fact never mentioned in climate negotiations. 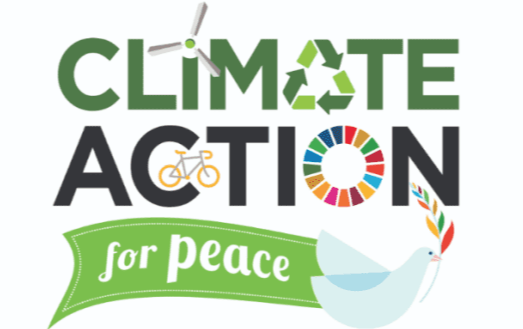 With global climate change accelerating and disastrous impacts rapidly increasing, we must ask why global emissions are not decreasing. I suggest one big reason is that the world is still in a weapons-of-mass-destruction arms race. The U.S. and Russia both have over 1,500 deployed nuclear weapons. There are now fewer nuclear weapons than during the 1980s arms race, but more countries possess them. There are over 70,000 armored tanks in the world, over 35,000 military aircraft, several thousand warships with 43 aircraft carriers on the world seas.

The majority of nations possess very heavy armaments. These weapons, which are constantly being developed for greater effectiveness, can only be manufactured by fossil fuels — and they are deployed through the burning of huge amounts of oil. Their continued existence means international relations of varying but steady hostility are unlikely to be cooperative in getting off fossil fuels.

In 2019, global military expenditures increased by the largest amount in a decade, reaching $1,917 billion. Disarmament would free up enormous funds and resources for climate change mitigation and adaptation.

Despite unprecedented, dramatic, worldwide global climate change driven disasters (like the western forest wildfires and now western drought in the United States), there is no plan to put global emissions into decline. Current government promises and policies both lead to increasing emissions, leading to an end of the world global heating of about 3ºC this century. Emissions and climate change effects are tracking the very worst-case scenario. Anything above 2ºC is an end of the world situation and the world is on track for 2ºC by 2040. Governments are determined to keep the fossil fuel industry fires burning.

The dramatic and increasingly catastrophic impacts of global surface heating, like the record fires that burned over 4.5 million square miles stretching from the California/Mexico border in the south up through Oregon and Washington states, which resulted in smoke from the fires extending across 4000 miles, have made no difference to government support of the fossil fuel corporations. For the post Covid-19 economic recovery, the G20 nations have pledged $207 billion to the fossil fuel industry — 52% of all public stimulus money for energy sector recovery. As pointed out by the IISD, “Decisions taken in response to the COVID-19 crisis today will lock in the world’s development patterns for decades.”

And then there’s the threat of nuclear conflict. It seems to be generally assumed that global nuclear war is no longer a problem since the Berlin Wall came down and the USSR dissolved. The insane “peace strategy” of MAD (mutually assured destruction) was forgotten about. Although it’s a non issue for media reporting, the reassuring assumption does not reflect reality. There are an estimated 13,500 nuclear warheads in the world. In 2000, the main nuclear weapons states committed themselves to an “unequivocal undertaking … to accomplish the total elimination of their nuclear arsenals.”

However, in 2020, the Doomsday Clock, published annually by the Bulletin of the Atomic Scientists to now track end of the world risks from global climate change as well as nuclear war, was put closer to midnight than ever at 100 seconds. The report said that humanity continues to face two simultaneous existential dangers — nuclear war and climate change. The international security situation is dire, not just because these threats exist, but because world leaders have allowed the international political infrastructure for managing them to erode.

Humanity has to deal with the nuclear war and climate change threats together. This means combined negotiations to rapidly get free of all mass-destruction heavy-duty weapons while also getting free of fossil fuels. As the 1992 Earth Summit agreements said, world peace is a pre-requisite for sustainable development.

Today, let’s consider how important peace is for our efforts to safeguard the future. To be clear, neither catastrophic climate chaos nor nuclear annihilation would be good for our children’s future.

What could and should you be doing about global warming? Click here to find out.