I recently reported that January 2020 was a record high global temperature increase for the month since fossil fuel industrialization started, that it hit 1.5°C, and that the rate of surface heating has accelerated faster over the past ten years. 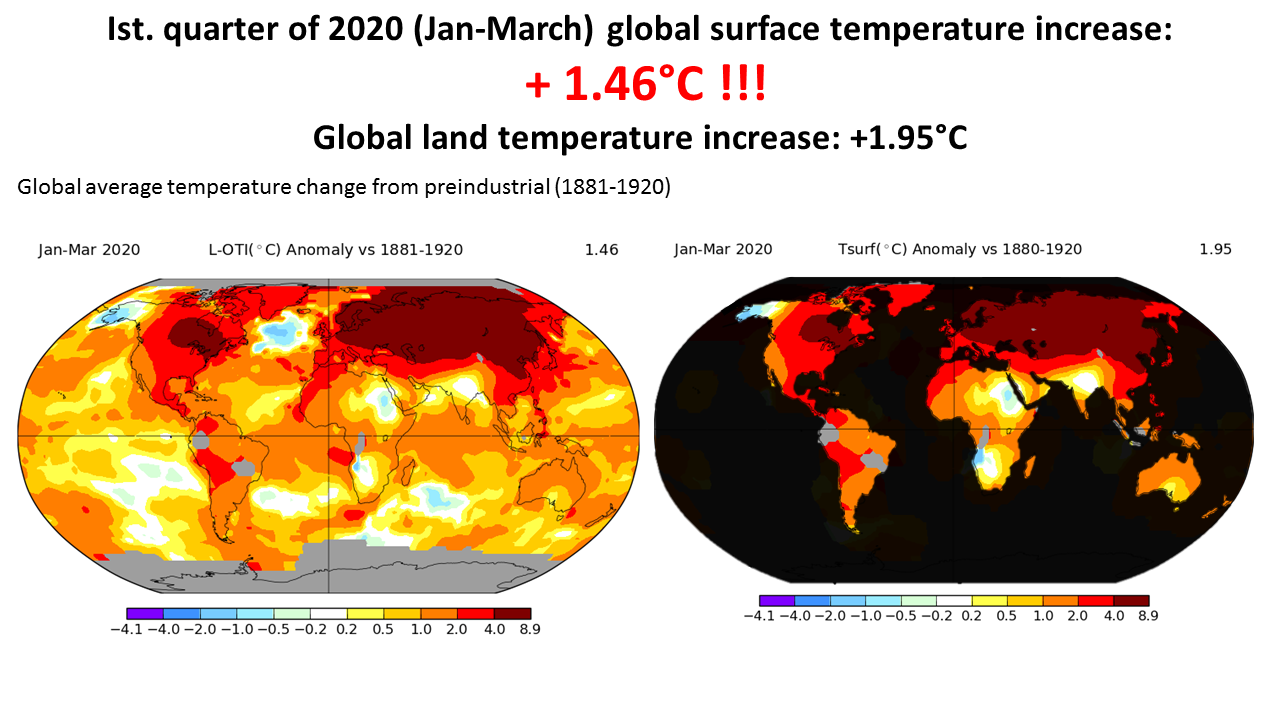 Now I have to report the climate-shattering news that the global average warming of the first three months of 2020 (January-February-March) was almost 1.5°C (1.46°C), as shown by NASA’s GISS computer data, and the land heating comes in at 1.95°C. This first quarter heating hits the maximum on the NASA scale (4°C to 8.9°C) in east and central North America above the Great Lakes and into Hudson Bay. Across the Atlantic, a vast area of maximum surface heating takes in all of Scandinavia, all of Eastern Europe, Russia and Siberia. It extends south down through the Caspian and Black seas and into northern China. That’s an enormous coverage of maximum warming in the Northern Hemisphere at this time of year.

The media picked up the Earth-shattering news from the NOAA that there is a 75% chance of 2020 being a new record for global temperature increase, which will be even more of a dire global heating emergency because there is no El Niño ocean surface phenomenon boosting the temperature as there was for the record heating of 2016.

Note that the big reduction in CO2 emissions this year due to the Covid-19 pandemic cannot be expected to lower the temperature increase this year, or next year, because it takes about ten years for emissions to affect surface temperature.

There is more evidence that global surface heating is accelerating. In the Southern Hemisphere’s 2019-2020 summer, Antarctica had its first heatwave (the Arctic has had many). Over three days of record heat (23-26 January), the temperature reached over 9 degrees C above freezing — and a new Antarctic daily maximum temperature of 20.75°C on Seymour Island east of the Antarctic Peninsula. These records were obtained by a research team from the University of Wollongong, Australia.

The reason for the accelerating increase in global surface heating is the accelerating level of carbon dioxide in the atmosphere. In September 2019, the World Meteorological Organization (WMO) issued a five-year assessment of global climate change data. It said that “compared to the previous five-year assessment period, 2011-2015, the current five-year period, 2015-2019, has seen an accelerated increase in atmospheric CO2 concentration. The growth rate of the CO2 concentration in the atmosphere averaged over the 2015-2018 period for which data have been completed and processed is 18% higher than that over 2011-2015.”

Continuing and accelerated trends have also predominated among other key climate indicators, including an acceleration of rising sea levels.

The WMO pointed out that global land temperature increase is already above 1.5°C. “The global mean land-surface air temperature for 2015-2019 was approximately 1.7 °C above pre-industrial.”

Most of the climate experts say they don’t know what the total impact of the worst-case scenario would be this century, because their computer modelling has not got that far. The experts rely on their models, while we hear about the levels of uncertainty of these models. However, we now have decades of a great number of observed recorded data sets. Those are scientifically now reliable trends, and they are all tracking their worst-case scenarios. With these recorded accelerating trends and the basic science, we do know with “a reasonable degree of certainty” what will happen if global emissions stay on the worst-case scenario.

If we stay on the worst-case scenario, from now on everything will get worse faster. The most important thing is that the world will become too hot for agriculture and crops will collapse as summer temperatures exceed crop tolerance. Heatwaves will increase in frequency, intensity, and duration. In the worst-case scenario, heatwaves will, every year, destroy agricultural regions. Droughts will increase in frequency, intensity, duration and area affected, destroying crops and the land. Desertification is spreading as it is. Droughts will become permanent and spread, ruining the land. Survivors of crop failures and famines will face rampant killer virus pandemics and killing tropical diseases worldwide. The world’s forests will burn to the ground. The world’s coral reefs will die — they are dying now. Through the loss of reefs, ocean heatwaves and acidification, fisheries will collapse — a major world food loss.

Why do we know all this will happen if the world keeps to the worst-case scenario? Because all of these impacts are already trending, and there is nothing in climate science that would counteract any of them. All of these horrors (and many more) await us with, at the very least, a reasonable degree of certainty. They are all coming at us too fast to respond to mitigation measures, which are not being applied anyway.

What are we to do? Treat the global climate emergency as an emergency. What would that look like? All the climate disruption, ocean, energy, forestry and agricultural experts acting together, focused on one massive project (Job One for Humanity) to immediately stop and reverse today’s trend of increasing greenhouse gas emissions. We now know, thanks to Covid-19, that we can make that happen immediately. By the way, the IPCC does not have this function, because it is owned and compromised by governments. A voluntary council (like the IPCC) of world experts for a climate-Earth emergency response could be set up right away from the impressive and growing project of the World Scientists’ Warning to Humanity.

The Covid-19 virus has taught us that we can immediately slash global CO2 energy emissions and still get by. The International Energy Agency estimates that the pandemic response cut fossil fuel energy emissions by 30%. It tells us that we can immediately cut global energy use so that it’s for essential services only. That’s huge — and an intentional global plan could get that number up to 50%.

If all humanity works together for our common survival, based on an international expert plan, we can slash emissions of CO2, methane, nitrous oxide, F-gases and black carbon, and still have a life worth living in the process. With a global green new deal, there would be zero unemployment with good clean renewable energy work. The future would then be bright … the best future imaginable. The money to make this happen is no problem: use the money spent on world arms expenditures and space missions to research other planets.

We can do this.