Several UN reports in February 2021 reminded the world about something we already knew (from the IPCC 2018 1.5ºC Report and the UNEP 2020 Gap Report): that to prevent global climate catastrophe, global carbon emissions must drop 50% from today by 2030 — which can readily be achieved by today’s amazing developments in clean renewable energies. All that is stopping the transition to energy safety is world governments still handing out money to the fossil fuel corporations. 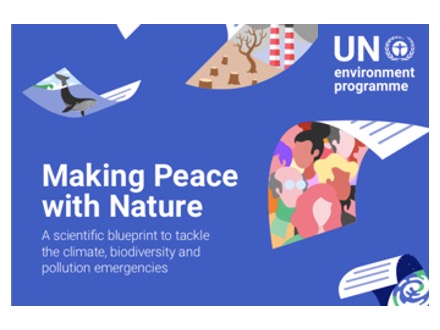 In February, the UN Climate Secretariat made it official that the national emissions targets fall far short of their Paris Agreement obligations (Nationally Determined Contributions Under the Paris Agreement Synthesis Report by the secretariat). For 2030, the Parties’ total GHG emission levels are on average projected to be only 0.7 per cent lower than in 1990 and 5.8 per cent higher than in 2000. That is a global suicide emissions scenario. But the UN Climate Secretariat report itself does not comply with the Paris Agreement, because it refers to false targets of net zero emissions and carbon neutral emissions. The Paris Agreement applies to total greenhouse gas emissions. So-called “net zero” (or “carbon neutrality”) is a red herring (a sleight of hand, if you will) that allows continued globally deadly combustion of fossil fuels — when we need to achieve zero combustion of fossil fuels and virtually zero carbon emissions.

The United Nations Environment Program released a new science-based report (18 February 2021) called Making Peace with Nature to address the three global emergencies of climate change, biodiversity loss and chemical pollution, which are rapidly wiping out life and are poised to end the human race.

The report made recommendations to governments for our future survival, which included that the more than $5 trillion in annual subsidies to sectors such as fossil fuels and greenhouse-gas-intensive industrial agriculture be redirected to accelerate the shift to climate stabilization and the restoration of nature. Governments should also look beyond economic growth as an indicator of performance and take account of the value of preserving ecosystems by including natural capital in decision-making.

Amongst the key messages is that climate change, biodiversity loss and pollution add up to three self-inflicted planetary emergencies.

Transforming social and economic systems means improving our relationship with the rest of nature, understanding its value, and putting that value at the heart of our decision making.

Secretary General António Guterres, in the preface to the UNEP report, remarked, “Humanity is waging war on nature. This is senseless and suicidal.” Many reports from many sources have constantly warned that current government policies put the world above the catastrophic 2°C increase in surface heating by 2050.

Over a great many years, since UNEP published Planet in Peril back in 2006, everything has been made much worse.

In February 2021, the UN Office for the Coordination of Humanitarian Affairs said that climate change is now a humanitarian emergency. Its update states that human-induced global warming has spurred a near doubling of natural disasters in the past 20 years.

Late in the month, the UN Security Council discussed global climate change as a threat to world peace and security. The UN Secretary General remarked that the climate emergency is already impacting every area of human activity and pointed out the long known fact that climate disruption is a crisis amplifier and multiplier.

Also in February 2021, the UN World Food Programme reported the number of Syrians who lack access to sufficient food has reached a record 12.4 million, or nearly 60 per cent of the population. The humanitarian tragedy of Syria continues to serve as prime example of the impact of climate change on pre-existing issues such as political instability, poverty and scarce resources. This is according to Jamal Saghir, Professor at the Institute for the Study of International Development at McGill University, a former director at the World Bank, who considers climate change the world's biggest threat to security.

In conclusion, it is clearer than ever that world powers still have the world fixed on an end-of-the-world scenario. The world population must rise up to demand that global emissions be made to drop 50% by 2030 as dictated by the science. The unprecedented evil of our governments giving the fossil fuel industry trillions of dollars in subsidies must be terminated immediately for our future survival.