From my perspective, the biggest news about climate change is that it is no longer news. 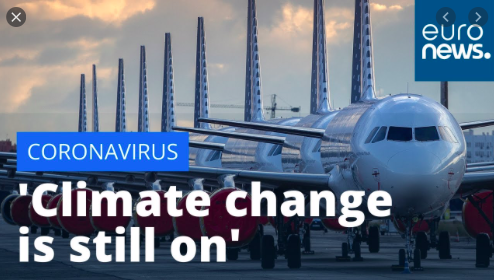 Elder climate activist, the BBC’s Sir David Attenborough, and the youthful climate activist, Greta Thunberg, are among those who have voiced concern that while the Covid-19 pandemic is a present-time global crisis, climate disruption is a dire global emergency for all today’s children and all future generations (not to mention the millions of people whose lives have already been impacted by climate disasters at least in part attributable to climate disruption).

Several writers have found similarities between Covid and the climate, and some have called on the world to launch a Covid-style response — immediate, united, aggressive — to avoid total planetary climate catastrophe.

It is to some extent reassuring that public opinion polls this year find that interest and concern about global climate change has held steady, including in the United States. A Pew Research Center poll of June (2020) finds that two-thirds of Americans “think government should do more on climate.” Broad majorities of the public — including more than half of Republicans and overwhelming shares of Democrats — say they would favor a range of initiatives to reduce the impacts of climate change.

Furthermore, the poll noted public concern over climate change, saying, “there are no signs that the Covid-19 pandemic has dampened concern levels. A recent Center analysis finds 60% view climate change as a major threat to the well-being of the United States.”

All well and good, but nevertheless this issue of all issues of all time is being treated as just another issue among many. There is not a government in the world that has an immediate emergency response to global climate disruption at the top of its agenda, and big economy governments are handing out millions in tax dollars to fossil fuel corporations under the evil guise of the Covid recovery.

There is one greatly publicized and glaring American similarity between the government response to the Covid crisis and the global climate planetary emergency. The US president has actually called both a hoax, and ranted about both pandemic alarmism and climate change alarmism (a long-time favorite term of the US climate denial campaign).

On both the Covid pandemic and the climate emergency, the US Administration has rejected the warnings and recommendations of its top experts, thereby denying the science. Incredibly, in both cases, the US President has blamed the situation on China (“The concept of global warming was created by and for the Chinese in order to make U.S. manufacturing non-competitive,” he tweeted in 2012.)

The administration has recently withdrawn America from the World Health Organization, and last year it pulled the US out of the 2015 international Paris climate agreement. Under the Paris Agreement, every nation in the world committed to take action to prevent the global temperature rising above 1.5ºC, which according to all the experts means a rapid and sustained global decline in emissions starting this year (2020).

In both cases, the US Administration puts money-making ahead of safety of the American and world populations. Reports show that as early as January, the president was advised by both his own experts and the intelligence services of the need for urgent mitigation measures against the spread of the virus, but he did not listen, saying it was no big problem and would simply go away. Only on March 16 did he announce “new guidelines for every American to follow.” This came from the Washington Post on May 6, which put what it called the “Trump Death Clock” at 83,707 Americans killed by the government’s dismissive inaction on Covid-19.

The US Administration, with its dismissive obstruction of international action to protect the climate and get the world off fossil fuels, is speeding up a fossil fuel and global climate disruption death clock. This ticking clock is a planetary timebomb we call “runaway,” which will put an end to the human species and most others, if ignored. Recent climate news — which most people may have missed with all the pandemic news — indicates that this timebomb is starting to go off.