Many Americans may not know it, but the biggest issue in the US election is global climate change. That's because it will hurt the lives of all Americans (with many already affected) and leave the legacy of a disastrous country for their children. And that’s because atmospheric CO2 (the amount of carbon dioxide already in the atmosphere) from burning fossil fuels is at a 23-million-year high and accelerating — increasing at a faster and faster rate. While the Republican Trump administration has opened up America for more fracking, neither presidential candidate has a plan to stop burning fossil fuels. 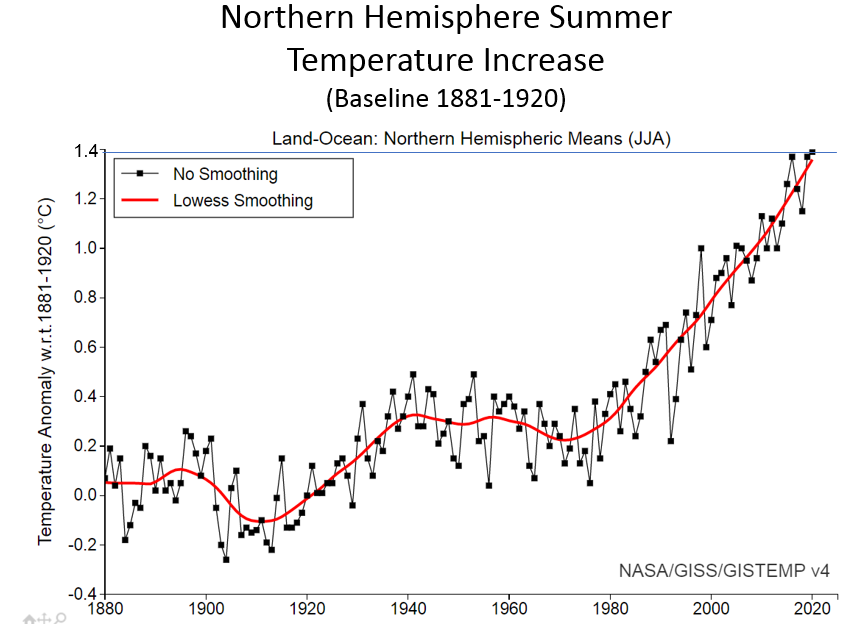 This summer, the western US got a taste of the terrible, fearsome heat that results from global warming.

World food security, civilization, the survival of the human race and almost all life depend on the summer temperature of the northern hemisphere (NH). Burning fossil fuels is driving up the NH summer temperature at a record rate that is accelerating. This is pouring more gasoline on the global warming fire.

On 14 September 2020, the NOAA announced another record temperature increase, saying that “the Northern Hemisphere just had its hottest summer on record” and its hottest January to August. This fact was reported, but it wasn’t reported as the worst climate disruption news yet. North America had its hottest August on record. Arizona, California, Colorado, Nevada, New Mexico and Utah each had their hottest August on record. No wonder the record western US forest fires and the extreme drought affecting most of the region, which is the start of megadrought.

The Northern Hemisphere summer temperature increase was a record high in 2019 and now a record for the summer of 2020, which is also accelerating higher. This means more northern hemisphere heatwaves, fires and drought. Also more Arctic heatwaves, fires and permafrost thawing on a heading to runaway global heating. This happened at a global warming of 1.1°C. The 1.5°C target is 36% higher.

I hope readers will think about the children in their lives, and use this information to demand en masse that their governments stop subsidizing and bailing out fossil fuel and pipeline industries immediately.

The degree of temperature increase affecting the Northern Hemisphere in the summertime, though seldom published, is of the greatest importance, and not only to those of us who live here. The NH average summer temperature increase AND the average actual temperature should feature highly in all climate change assessments.

As is now being experienced, global surface heating increases the frequency and severity of heatwaves, which is damaging to food crops as well as increasing forest fires in the summertime.

The world’s best food-producing regions are in the Northern Hemisphere, with the US the top cereal producer. Though yields in the US are still increasing, Northern Hemisphere heatwaves have already caused some disastrous declines of crop yields and unprecedented forest fires. The IPCC said years ago that crops do not tolerate heat above 30°C. During heatwaves with temperatures only slightly above 30°C, yields plummet. Burning more fossil fuels today is now burning down the food of today’s children.

We have always known that it would not take much global warming to put crops into decline in tropical regions and the hot regions of Africa. If global fossil fuel emissions do not decline fast, increasing Northern Hemisphere summer heat (along with tropical and African heat) will lead to world agricultural decline from summer heat beyond the tolerance of crops, made worse by increasing drought. As NH temperatures keep rising, the collapse of world agriculture will be the end of our global civilization, which depends entirely on the great success of our agriculture. Global climate disruption ignored (as it is today) means global famine tomorrow. Without today's high agricultural crop production, only a small fraction of the human population could survive.

Northern Hemisphere summer temperature increase matters for all life. Heating of the Northern Hemisphere in the summer is leading to record Arctic temperatures, which threatens the survival of the human race and most life, because the Arctic is the source of feedback greenhouse gas emissions and the cause of runaway global heating. This why UN Secretary- General António Guterres has said that climate change is an existential threat to most life on Earth, including human life. In September 2018, he warned that the world is facing “a direct existential threat” and must rapidly shift from dependence on fossil fuels by 2020 to prevent “runaway climate change.”

What is runaway climate change, and why would it wipe out most life? First, bear in mind that atmospheric CO2 today is the highest it has been in 23 million years. The Arctic holds more than double all the carbon in the atmosphere, which until recently was safely stored in frozen permafrost. Greenhouse gas emissions are heating the Northern Hemisphere (which has greater land mass) faster than the Southern Hemisphere (which includes more oceans and their cooling effect), and the Arctic heating is the very highest. In the Boreal forest in Siberia, there are record forest fires burning. Temperatures in Arctic Siberia this summer hit an all-time high and Arctic fires emitted more carbon than ever before — an amplifying feedback to global warming. You see, Northern Hemisphere summer heating is rapidly melting the Arctic summer sea ice, which reduces the cooling and reflective albedo effects of white snow and ice, which results in the Arctic heating faster, in a vicious circle.

The 2020 September sea ice low was second only to the big record drop in 2012 (which was due to a huge storm breaking up sea ice at the end of the summer). The amplified Arctic heating is thawing permafrost (what was permanently frozen ground) and that is releasing methane, CO2 and nitrous oxide. Permafrost thawing becomes progressive and irreversible at a global temperature increase of between 1.5°C and 2°C, if not before. That is runaway, and it might have been triggered already by industrial greenhouse gas emissions. It is the Arctic carbon time bomb and the fuse has been lit and burning for quite some time. 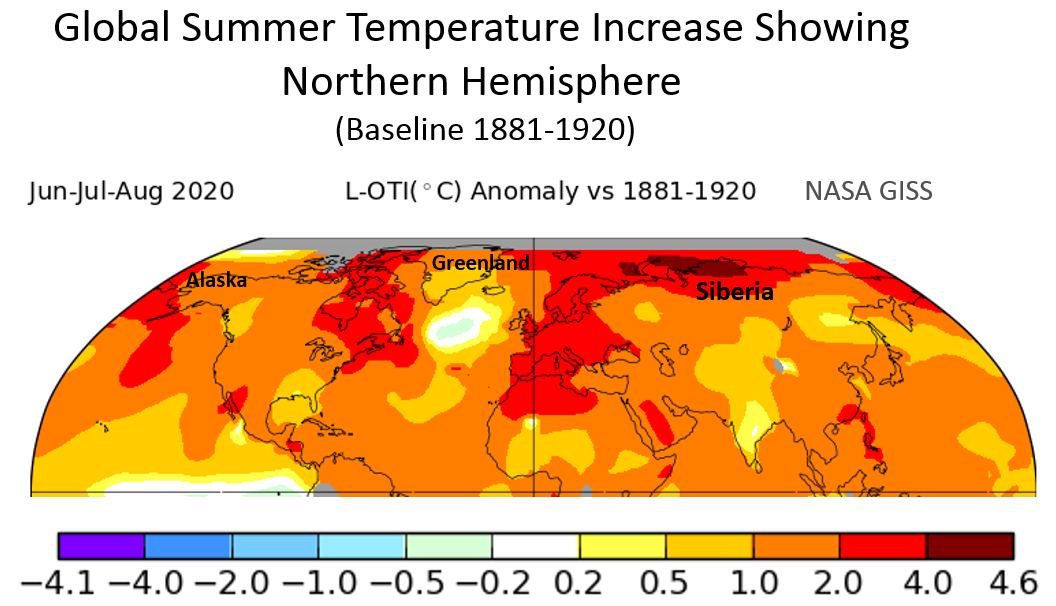 These are dire planetary emergency temperature numbers. This will carry on increasing, higher above normal, as long as fossil fuels are burned, and the increased NH summer heat will last thousands of years.

These global average temperature increases may not sound like much but the summer surface heating of the Northern Hemisphere has increased by over four times since 1980, and it is accelerating higher. Connect the dots: the Northern Hemisphere’s accelerating global surface temperature increase, summer heatwaves, crop damage and forest fires; plus escalating Arctic heating, boosted by loss of summer sea ice, increased permafrost thaw, increasing Arctic feedback emissions of methane, CO2 and nitrous oxide; Arctic temperature has been increasing progressively faster than the Northern Hemisphere’s since 1980; sea ice is disappearing, adding to Arctic heat, with 2020 sea ice loss second only to 2012; as the Arctic heating increases, it releases more methane, CO2 and nitrous oxide faster and faster.

In this runaway situation, the most rapid slashing of industrial emissions will not stop global climate disruption continuing and still getting worse, nor give us a chance of survival. We must develop an international Manhattan-Marshall Model — the greatest human venture ever — to at least try to save ourselves from ourselves by replacing all fossil fuel energy and also urgently developing safe technologies for removing carbon dioxide from the atmosphere.