With Apologies to the Great Chinese People: Is China a Climate Solutions Leader or a Climate and Oceans Disruption Leader?

Still being reported as great climate news, on September 22, 2020 at the United Nations, Chinese President Xi Jinping declared that his country “would aim to become carbon neutral, in the battle against climate change, by 2060.” 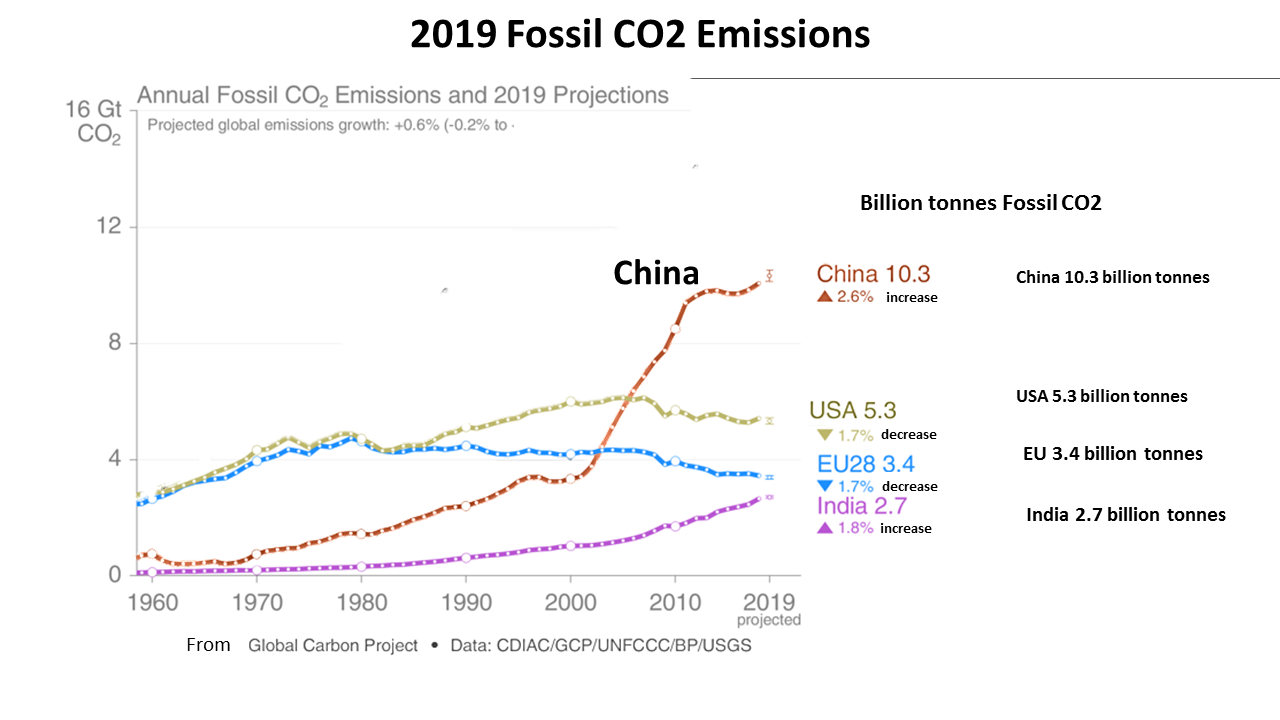 As reported by the UN, Xi continued, “We aim to have CO2 emissions peak before 2030 and achieve carbon neutrality by 2060.” The universal reporting of this as good, hopeful news shows a failure to understand both the essential science of CO2 and what the global climate emergency is. Furthermore, the all-important peak of China’s emissions is unchanged since the country’s 2015 position.

What this announcement actually means in terms of today’s disastrous climate change impacts is that CO2 emissions from China will continue to increase up to 2030 and emissions will not cease by 2060. It is another long delay in reversing emissions — a deadly delaying tactic that has been going on globally for 25 years.

This is an end-of-the-world strategy because the science is definite that global emissions must drop fast from this year (2020). Indeed, UNEP says they must decline by 7.6% annually from 2020 to 2030.

In 2019, CO2 emissions from China at 10.3 billion tonnes constituted 45% of global CO2 emissions. Because practically all CO2 emissions last essentially forever in the atmosphere — heating up the surface of the planet and acidifying as well as heating the oceans — another 10 years of such enormous emissions will be the death of the future.

China’s GDP is no longer that of a developing country (see image below). In terms of gross domestic product (based on purchasing power parity), China is now the largest economy in the world. 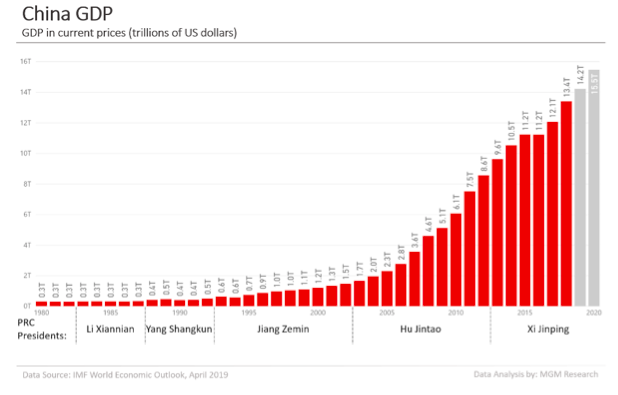 Yet in international climate change negotiations, China is classified as a developing country, and in the 1992 UN Framework Convention on Climate Change, developing countries are not expected to drop their emissions as soon nor as fast as the developed nations. At this time, and because of the dire state of global climate change emergency, this is suicidally absurd. How rapidly global temperatures and ocean acidification increase is determined by current and future CO2 emissions. It makes no difference where emissions come from — developed nation, “developing” nation, or a nation truly struggling to develop. These emissions last thousands of years and all add to atmospheric CO2 concentration, which is the highest it’s been in 23 million years.

(By the way, it should be noted that North Americans emit more than double the CO2 from the Chinese per capita.)

Reporting on the September announcement from China’s government, Climate Action Tracker has said that China’s Covid-19 recovery activities remain carbon-intensive and, “most worryingly, China remains committed to supporting the coal industry with half of the world’s coal capacity.” The Climate Action Tracker is keeping its rating of China’s response as “highly insufficient.” 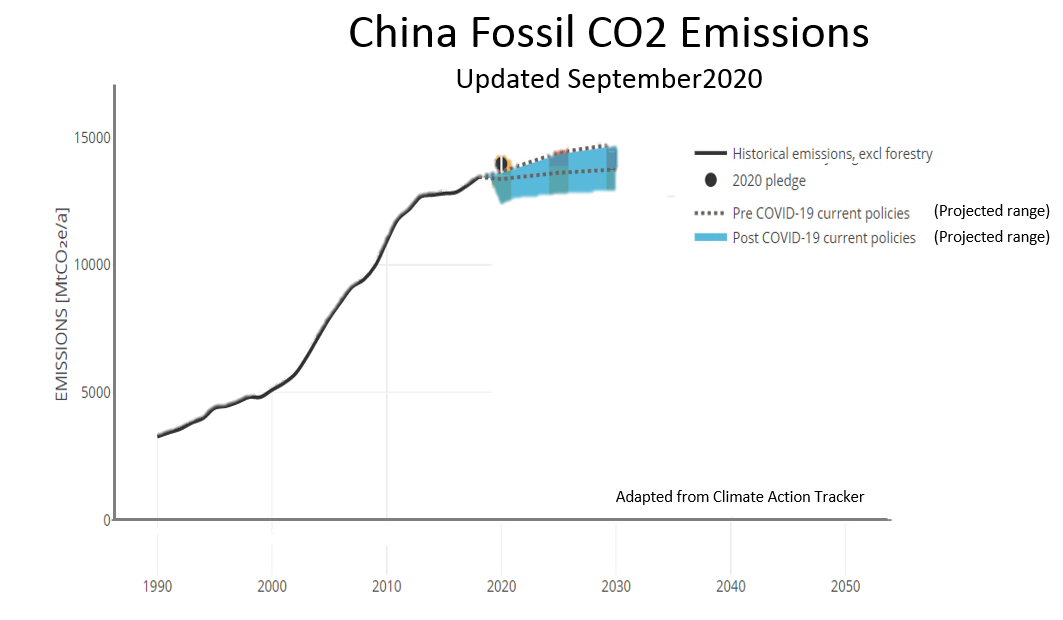 Total coal mining capacity in China was at 3.53 billion tonnes per year for 2018 (National Energy Administration). By mid-2020, China had permitted more new coal plant capacity than in 2018 and 2019 combined, and of all coal-fired plants under development in the world outside of China, one quarter has involved funding from Chinese financial institutions and/or companies.

By mid-2020, many sector indicators of the Chinese economy had largely recovered to pre-COVID-19 levels, including coal consumption, oil demand, cement, and construction demand. Between January and April 2020, China's CO2 emissions fell by 11.5% compared to the same period in 2019, but emissions have since rebounded to pre-pandemic levels owing to the fast economic recovery in provinces where industrial activity is concentrated. China has over 40 GW of new proposed coal plants and 17 GW of new plants permitted before July in 2020.

The government of China is pushing fossil fuels to the maximum, evidenced by the fact that even under President Trump's "unleashing" of untapped fossil fuels, US emissions have dropped slightly.

While China is by far the world’s largest subsidizer of its fossil fuel industry, it is phasing out subsidies to renewable energy.

The fossil-fueled economies of China and the rest of the world are climate-catastrophe, planet-destroying economies, and no change to that is pledged or planned by China or the world as a whole.  For our common survival on planet Earth, global emissions that fell in the first quarter of 2020 must keep on falling fast, a fact that applies to China more than any other country.

With respect to climate justice, the poor countries and the poor in all countries are hit first and hardest by global heating and climate disruption. Recognizing this, many small-economy countries have made the best pledges on their emissions cuts.

Job One for humanity’s survival is that all countries must immediately apply economic climate change mitigation measures — particularly the highest emitters: the USA and China. Because they are killing us.

Click here to see what will happen if we fail to get global warming under control.

Click here to see what you can, could, and should be doing to help manage the global warming emergency.