What is coming behind the COVID-19 pandemic, a global recession/depression, then something even worse? Is it better not to know and not be prepared, but happier until the next shoe drops?

Behind the COVID curtain obscuring determinative Reality, the political right ignores vast ecological overshoot amidst a palpable climate emergency. Granted that emergency cannot be seen, but it takes rabid ignorance to ignore the symptoms all around us.

As our new blog post explains below, there is no plan or approach being discussed that could salvage any viable part of humanity or civilization.

Thus, this poor, sad USA is entirely lost behind the COVID curtain, barreling toward comprehensive self-destruction. Which side is more lost: is it the right in deep denial doo-doo, or the left believing in salvation by fairytale?

Perhaps we all are lost in the tragedy, but tragedy implies that the main characters in our self-destructive drama could reach some kind of catharsis or understanding of our fate.

Are we able to see beyond our own blindness? Could we understand that human survival means that far fewer of us must take far, far, far less from our Real Mother, Mother Earth?

SITUATION: COVID-19 continues to dominate everything and everyone. In the US, more than 1.75 million infections and more than 100,000 deaths mark this Memorial Day. Tragic irony. Yearning for a return to normalcy is coupled with the dawning realization that normal is evaporating in the summer warmth. The virus curtain hiding Reality means the US public is consumed with fact-free fairytales as opposed to valid and reliable facts.

The Trump Administration’s perpetration of conspiracy theories and factless fairytales are too numerous to even catalogue, much less discuss. Explored here are some fact-free fairytales not promoted or promulgated by the national administration that may well be determinative, and are hidden behind the COVID glare.

Consistent with our Apocalypses series, let’s pull back the curtain and explain…….

It’s always useful to begin with an Iron-clad Law: humanity will either respond immediately and constructively to the emergent crises of ecological overshoot and the cooking climate, or there will be no viable future for humanity. So, let’s relate to those who at least have some understanding that the climate and ecological emergencies exist.

What do they propose, and is it plausible?

To begin, these well-meaning, but nonetheless deluded groups argue for a plethora of things falling under the umbrella of a Green New Deal (GND) accomplished through a rapid displacement of fossil energy with “renewable energy.” This GND idea expects that the US can have its present consumer society with economic growth using the “plug and play” of renewable energy instead of fossil fuel energy. At the same time, they claim that by displacing fossil fuel rapidly, i.e., 50% by 2030, and 100% net-zero energy by 2050, we can avert the worst aspects of the climate emergency and hold world warming to <2◦C.

This is a wonderful wish and a fact-free-fairytale.

Neither a Green New Deal nor a plug-and-play renewable US consumer society, like the one we left behind pre-COVID is possible in any way whatsoever, despite the billions of articles that suggest otherwise. The first fact-free fairytale to explain is one called the Tinkerbell-Effect. The Tinkerbell-Effect is really a belief in something that does not exist yet is believed will soon exist by many, if not most people. 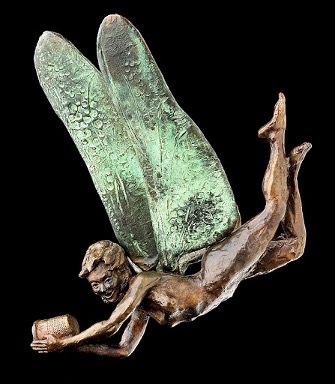 Just because Tinkerbell has been bronzed does not mean that she was real or that she existed except in children’s fiction! The corresponding Tinkerbell-Effect is a fiction that enables the IPCC fictionalizers to imagine that the 50%/2030, 100%/2050 mean anything real about halting climate cooking before we are all well-done!

Here is the explanation, a ten-minute essay titled “The Tinkerbell-Effect and Breaking the Climate.” It is a simple delusion to believe that humanity has 10 years to cut fossil fuels in-half and then 20 years to get rid of them. The carbon budget left means >66% cuts in fossil fuels in 10 years, and down to nil fossils by 2035.

Belief in Green New Deals with “renewables,” is another fact-free fairytale.  There are no facts to support a Green New Deal proposal, or anything related. As described in our blog post “Visions & Contradictions: Assessing the Green New Deal”, the GND does not hold up well in the context of our climate and ecological emergencies by maintaining delusions of perpetual growth, continuing our extractive economy, and providing much more for everyone.

The GND assumes a massive renewable buildout, but renewables cannot supply the ravenous energy needs of this industrial system. An excellent start to understanding this is “WHY RENEWABLES CAN’T DELIVER THE SAME QUANTITY AND QUALITY OF ENERGY AS FOSSIL FUELS”, explaining in 10 minutes why renewables can’t deliver. Needing more and deeper, you could try Richard Heinberg and David Fridley’s, “Our Renewable Future.” If you prefer, try their film.

So, anyway one cares to look at it factually, “renewables” flop. Besides, wind and solar labeled as “renewable energy”, is a sham. Wind turbines and solar arrays are not self-renewing, but forests and prairies are.

PEEKING BEHIND THE COVID CURTAIN

Apocalypse is a Greek word literally meaning to see behind the curtain hiding deeper meaning and to thereby get the “revelations”, which in this case means Reality and not fairytales. Reality, comprised of valid and reliable facts, speaks numerous of Apocalypses.

Our first Cascading Apocalypses blog post explained the dramatic overconsumption of our Earth, particularly for the US overconsumption society.  (Go to the Ecological Footprint analysis.  Enter the world analysis and click on the US, the big red country on the left. What one sees is that the US economy-society uses up more than twice of our United States’ biological life support systems each year, and that this has been going on for more than 50 years.  Meanwhile the biological capacity for each of us has declined by about 25%. The valid and reliable facts for the other wealthy nations, i.e., the G20, are quite similar.)

What would be a nice way to say that we humans are destroying our life-supports?  Cooking the climate is just a symptom; there are many others.  When it comes to climate and rejecting fossil fuels, it is necessary to quit these particular poisons now, not gradually over decades.  Survival for more of us depends on that immediate response.

We still are sitting in front of the COVID curtain and no nation is involved in what Reality demands. Part 1 of this series explained that any possible future means for us that “there must be far fewer of us taking far, far, far less from Mother Earth.”

Now valid and reliable climate facts explain that this result must be accomplished in a few years, not a decade or two or three. Otherwise, we can make our planet uninhabitable for us and most all of life quite soon. We are on track to cook ourselves well-done and the COVID curtain is delaying the sheer reckoning.

This 21st century will soon see far fewer humans, each consuming far less of Mother Earth, with only a fraction of the energy we now have for each of us. Or, we can make our planet uninhabitable and extinguish ourselves entirely. It’s our choice. Peeking behind the COVID curtain gives us that Apocalyptic revelation – the more we peek, the more numerous are the Apocalypses and the starker are their consequences.

It has long been said that “sooner or later, we all sit down to a banquet of consequences.” Robert Lewis Stevenson is credited with that statement, in the 19th century. Now in the 21st, the consequences are upon us.

Can we view Reality, peek behind the COVID curtain, understand that living in cooperation with Earth’s limited bounty is required for every living species — even humans? Or, do we end our extremely short existence and thus never deal constructively with Reality behind our greedy delusions and childish fairytales?

We don’t have to choose. Mother Earth’s limits, like the limit of any mammal mother, will choose for us, and it will be quite ugly being rejected by Her.

Click here to see the first article in this series, Stepping Back & Seeing the Global Big Picture Including & Beyond Covid-19