The financial costs and consequences of the escalating global warming emergency... 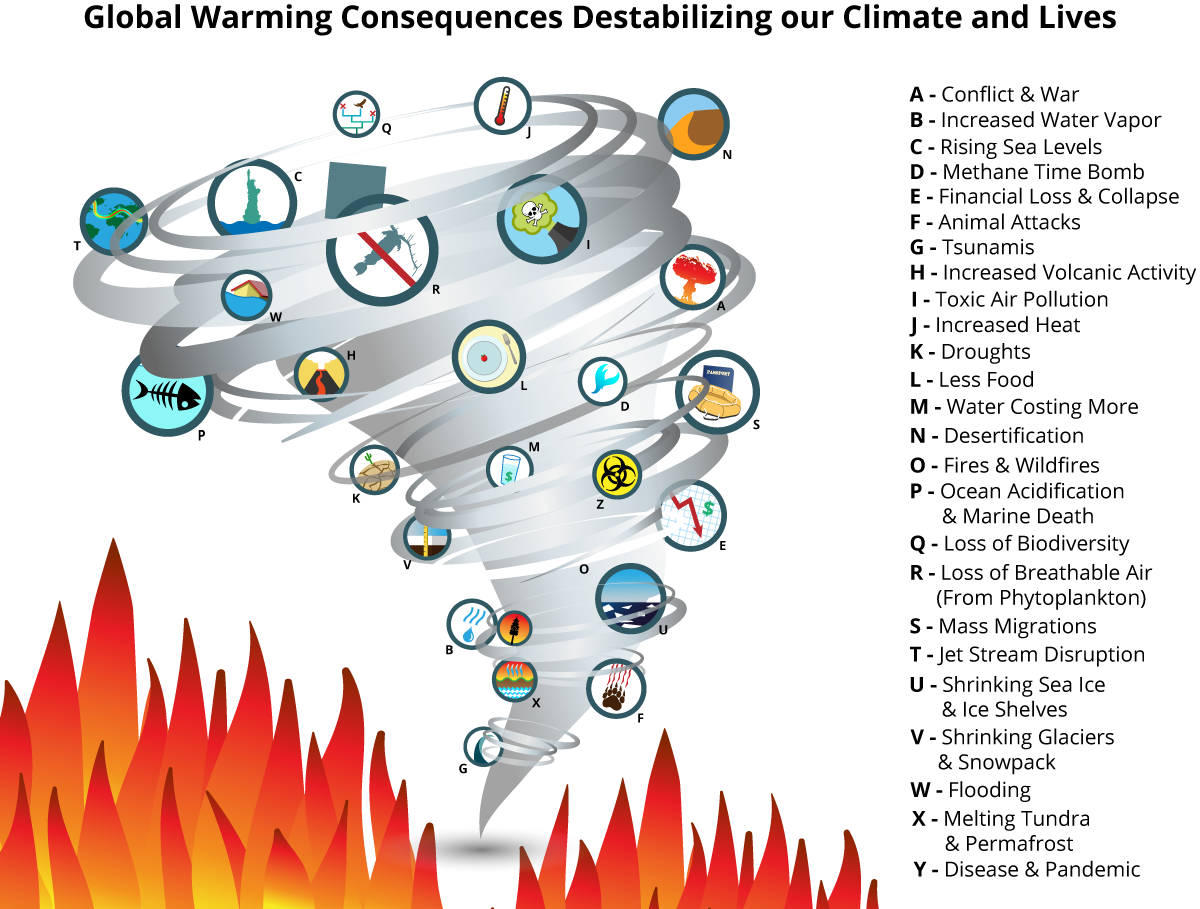 We are starting out the list of worst global warming consequences with the personal, business, and national financial costs of global warming. This is because financial loss and preventing financial disasters are something that most people are concerned about and monitor constantly for their future wellbeing... 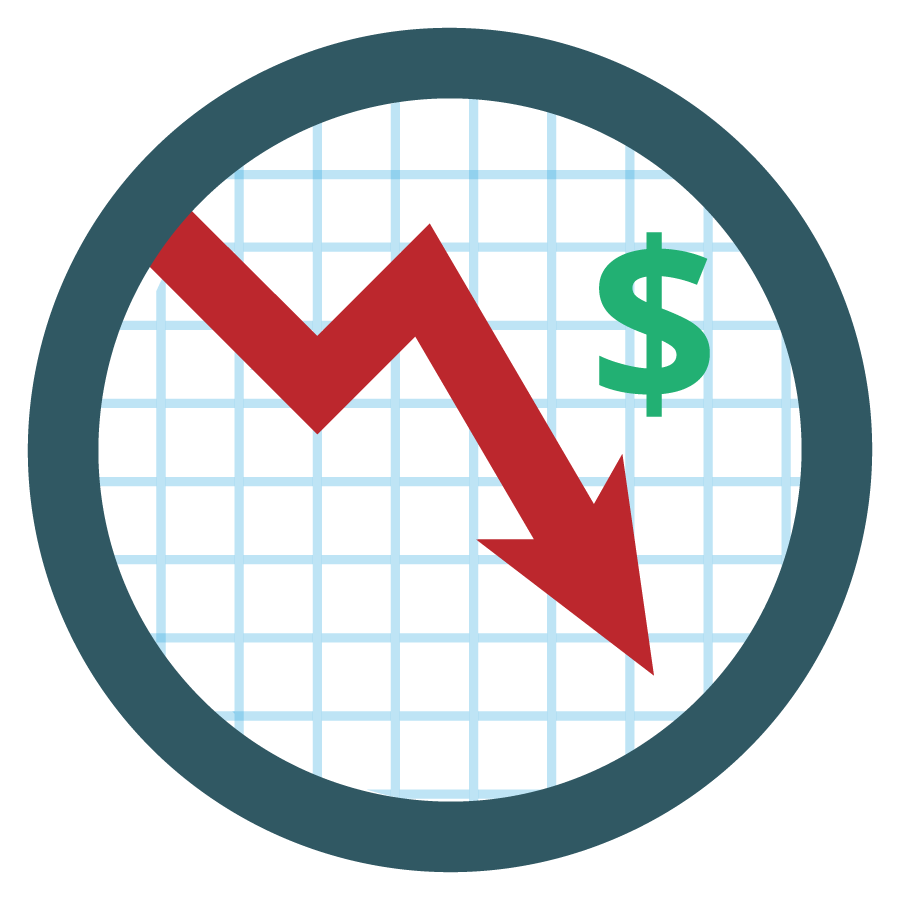 If temperatures continue to rise as they are doing now and rise only as over “optimistically” projected by current global warming authorities until the turn-of-the-century:

2. Global warming will facilitate a massive transfer of value and wealth from the hotter parts of the earth to the cooler parts. At least initially, countries like Russia, Mongolia, Canada, and possibly the northernmost parts of the U.S. will see large economic benefits. Most of Europe will do slightly better even though parts of it will suffer severe droughts. The U.S. and China will do slightly worse, mostly because the southern and western parts of the United States will be in a heat and/or drought crisis. All of Africa, Asia, South America, and the Middle East will be economically ravaged.

4. Inflation will continually rise (reaching up to 100% in the final phases of the Climageddon Scenario) (3). This rising inflation is due to having to repair the ever-escalating, near continuous damage from ever-more global warming related natural disasters as they continue to expand across, local, regional, national and global areas. Repairing these continuous and escalating natural disasters will create an ever-increasing need for resources that will grow ever-scarcer. The needed repairs and the resource scarcity will continually push prices and inflation higher and higher.

The financial costs of global warming will go up with each rising degree of average global temperature. It is highly probable that global warming costs will not rise in a linear fashion, but more likely in a rapidly rising exponential curve.

The estimated differences in total global warming costs are derived from different inputs, assumptions, and computer models. As you will soon discover, no matter what estimates you choose to use, the escalating costs of global warming will put an unbearable, steadily increasing burden on the citizens and nations of the world. When you read these cost estimates, keep in mind that none of these estimates places any dollar value on the massive predicted loss of human life.

Obviously it will be horrendously costly to repair, rebuild, relocate, or construct for the first time both current and new infrastructure, homes, and businesses. The Stern Review done in 2006 estimated that the rising costs of escalating global warming will grow to 5% or more of the gross domestic product of all the nations on Earth. (Gross domestic product [GDP] is a monetary measure of the value of all goods and services produced in a given period of time [quarterly or yearly].)

This means that 5% of the the world’s total gross domestic product will be lost to emergency recovery from global warming-related consequences. For an economic comparison and perspective, consider that the Great Depression of the 1930s in the United States was the result of only a 4% loss in U.S. gross domestic product.

Newer studies from 2015 project that if the average global temperature increase reaches 6° Celsius (10.8° Fahrenheit) by the end of the century, the nations of the world will be spending from 10% up to a possible 30% of their total gross domestic product recovering from an endless stream of mega global warming-related consequences and catastrophes on the final road to extinction. The current GDP of the world is about $80 trillion a year; by 2100 it may double or triple that. This means we could be spending one-third of the world’s GDP in 2100—about $100 trillion a year—just to try to survive extinction from global warming.

If we are able to avoid global warming extinction, the total estimated costs of all related global warming destruction could be in the range of $400-$600 trillion—about eight years of the current total gross domestic product for every nation on Earth. To put this in perspective, this means that if we fail to successfully resolve global warming now, farther down the road we will have to dedicate 5 to 8 times the total current value of all annual global human productivity to try to recover from the global warming consequences.

Worse yet, that is only what we may have to pay if we are lucky. If we go into irreversible or extinction-level climate destabilization, what will the cost be then?

Additionally, all of the related financial costs of global warming-related catastrophes and emergencies will rapidly diminish any existing national emergency recovery safety nets. This will cause unthinkable suffering among those who are not prepared and who will consequently have no governmental safety net.

It is clear that no person, corporation or nation will be able to cope with these ever-increasing levels of economic losses caused by global warming.

In 2017 alone, the total combined costs of all US global warming aggravated disasters was about 500 billion dollars. Hurricane Harvey alone exceeded 300 billion and hurricanes Irma, and Marie and the many wildfires and mud slides in California made up the difference.) This 300 billion dollar cost was exactly what was predicted in the new Climageddon Scenario climate model in phase 2 (described in the new book Climageddon, The Global Warming Emergency and How To Survive It.) 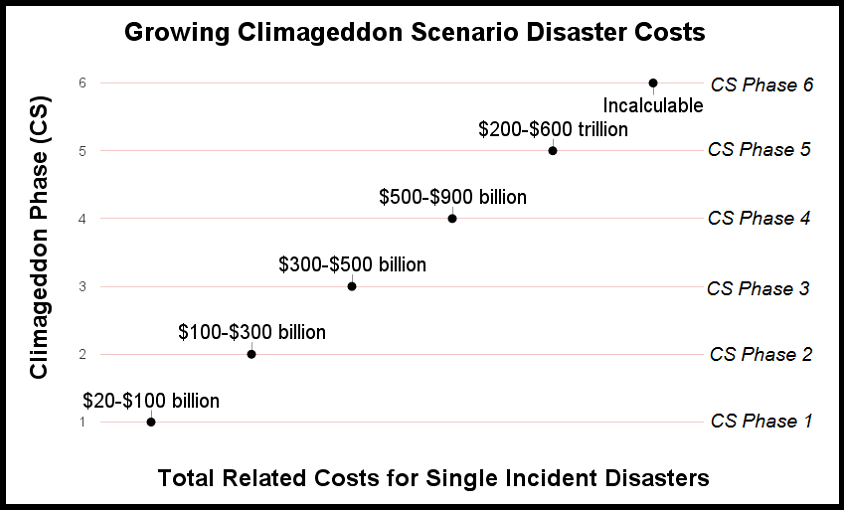 Who are the biggest financial losers as global warming increases?

There will be very big financial losers as global warming escalates. A few of the biggest losers will be:

a. Home and business owners in global warming unsafe catastrophe zones. Those living near river or lake floodplains or close to oceans, or areas vulnerable to wildfires, droughts, hurricanes, or tornadoes will be subject to huge real estate valuation losses and insurance premium increases. Insurance companies will be forced to raise prices 1-5% per year for any customers in the escalating global warming high-danger zones, or they will cancel policies and offload the risks and the unpredictable costs onto national government relief programs and safety nets.

It would also not be unreasonable to estimate that real estate prices in affected global warming high-risk areas will soon begin dropping 1-3% per year as savvy buyers realize the risk and potential losses involved in such properties. In extremely high-risk areas, real estate prices could crash drastically, similar to the way the prices of homes and businesses crashed when toxic pollution was discovered in the water and soils at Love Canal, New York. (See this article on the new rules for buying real estate in the world of increasing global warming and the vast new global warming unsafe zones.)

b. Fossil fuel companies and related industries will not be able to hide or secretly offload the pollution and health costs onto unsuspecting taxpayers for the worst effects of their products. Fossil fuel subsidies that now total $5.3 trillion a year will soon disappear, and special global warming reduction carbon tax fees from $40-$100 a ton or more will be added to their operational costs. Fossil fuel companies will suffer massive stock divestment actions, massive numbers of individual and class-action lawsuits holding them responsible for global warming damages and they will be hindered by governments with new regulations and taxes on profits to further reduce fossil fuel use.

c. Countries in the Southern hemisphere will be most affected by the worst of escalating global warming. They will experience soaring heat, the rapid spread of tropical diseases, as well as economic, social, and political instability. Needless to say, such countries whose economies are dependent on tourism will see those revenues steadily disappear. The irony here is that many of the undeveloped nations that have produced only a tiny fraction of total global warming will get poorer as northern countries responsible for most of the global warming will initially get richer and experience other benefits.

e. Average individuals from every generation in global warming unsafe zones will watch their monthly budgets, reserves, and personal and business equity be destroyed. This is because global warming-related inflation and “natural” disasters and their recovery costs will continue rising as the temperature rises. Part of the reason for this loss of equity is that as the emergency worsens, individuals will not be able to find relief from either insurance or government emergency programs because eventually those funds will also be exhausted by the ever-widening drain in the bathtub of global warming costs. To add further hardship, these individuals will endure steadily increasing new taxes, which their governments will be forced to impose as insurance companies go bankrupt due to the continuous, worsening “natural” disasters caused by global warming. To learn more about global warming unsafe zones see the Migrating North or South of the 45 Parallel map and copy near the bottom of this page.

f. The poor and the middle class will be the first to suffer and they will suffer the most. In addition to the pain of dwindling personal equity and rapidly increasing taxes from ever-escalating global warming disasters, the poor and the middle class will also watch their government social security and safety net benefits continually cut back and finally disappear as their governments try to cope with dwindling and overburdened resources themselves (i.e. retirement and unemployment benefits, food assistance, assistance for the elderly or physically or mentally handicapped, worker’s compensation, etc.). Click here to see a small glimpse of how bad it will get for the poor. (7)

In the early to mid phases of the Climageddon Scenario described here, it is fair to say that almost everyone will begin watching the process of their personal wealth dwindling and disappearing. More will be said about the many costs of escalating global warming here.

Researched and edited by the Job one for Humanity Team
Please share this blog post in other Internet blogs and wherever relevant and appropriate.