The popular media keeps telling us that the current climate target in average global temperature increase is no more than 2 degrees Celsius (3.6 degrees Fahrenheit), but as mentioned previously that threshold has already been crossed. A “no more than 2 degrees Celsius increase” may well be an impossible target due to the toxic carbon and methane levels already built into the system that cause global warming. This does not even include the current exponentially increasing carbon and methane pollution.

To make the global warming matter worse, almost every IPCC governmental 5-7 year update report coming out on the climate over the last 25 years has repeatedly adjusted the climate threat estimates to the negative by an average of 20-40%. This means almost every IPCC global warming report has been plagued with gross underestimation of the future warming we all will face. There are many places these underestimates are found in the IPCC's modeling and predictions.

To help you see where we are currently in a losing battle to end global warming, we have provided four "Keating" atmospheric carbon graphs below for atmospheric carbon pollution data on different parts of this page. Keep in mind that more carbon in the atmosphere equals more heat.

The carbon ppm level graphs below will help illustrate the carbon pollution data and problem both since the industrial revolution as well as closer to the present day. They will also show carbon ppm for the last several hundred thousand years, and going back millions of years. you can see the modern spike in today's carbon pollution emergency in a historical and post industrial revolution context.

It is important to notice in the graph immediately below that the average carbon parts per million (ppm) never rose much above 270 ppm until the Industrial Revolution of the 1880s. For hundreds of thousands of years before that, carbon ppm stayed in that general range. Only hundreds of millions of years ago were carbon ppm levels much higher, during Earth's turbulent developmental and volcanic periods. 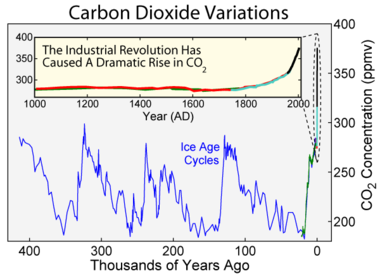 Something has radically changed in toxic carbon ppm air pollution levels since the beginning of the fossil fuel-powered Industrial Revolution of the 1880s. For the first time in hundreds of thousands of years we have now crossed the unprecedented carbon 400 ppm level. (See the graph below) Today's carbon ppm 400 + level is now nearly double the carbon 200-270 ppm range it held consistently for hundreds of thousands of years. This radical change will have consequences! 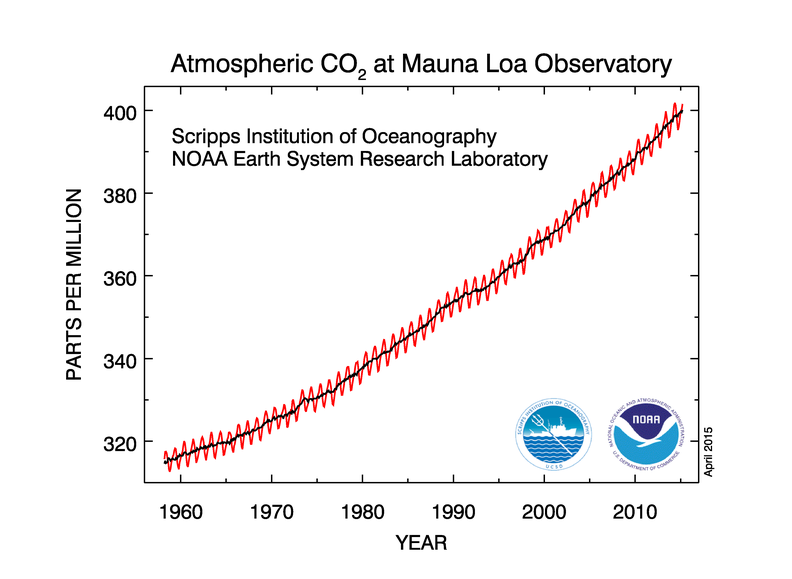 Even if we do not cross any critical climate tipping point, by just extrapolating on the current exponentially rising carbon levels each year, we could be at carbon 550 ppm level in as little as 30-40 years or less. If we hit carbon 550 ppm—as it appears we will—this "seals the deal" on the coming radical and destructive changes for most life on earth as it appears it will occur without radical and immediate reductions in fossil  fuels use.

What is hard to fathom is that even if we stopped all toxic carbon and methane pollution from fossil fuel use today, it is estimated that it would take hundreds of years to bring the atmosphere back into safe carbon ppm levels (the carbon 350 ppm range.) All this bad news indicates that we need to resolve the global warming emergency immediately as well as immediately start preparing for and adapting to a radically different world, both individually and collectively!

Extrapolating from the carbon ppm and average global temperature graph below, it appears that in spite of what we are doing now to stop or slow escalating global warming, the current global average temperature is increasing by approximately 1/2 degree Fahrenheit for about every 25 additional parts per million of toxic carbon going into the atmosphere. (See the first carbon graph below.) Please also keep in mind that this current trend in increased carbon ppm levels and temperature unfortunately does not also include:

Increased or decreased carbon ppm in the atmosphere appears to have a direct or near direct relationship to rising and falling temperature all the way back to Earth's earliest times hundreds of thousands of years ago. Please also be aware that life on Earth as we have known for it hundreds of thousands of years really flourished only when the carbon levels and temperatures were in a range of 200-270 ppm. (see graph below)

Today's carbon ppm 400 + level is now nearly double the carbon 200-270 ppm range it held consistently for hundreds of thousands of years. This radical change will have consequences!

In the next graph just below, one can see carbon pollution levels going hundreds of millions of years into our past. As you can see from the carbon ppm range disclosed near the bottom of the far lower left of the graph, modern life forms as we know them today appear to exist and function best when atmospheric carbon levels are quite low in about the 200 -270 pmm range.  Life on Earth was much different with the much higher carbon levels seen hundreds of millions of years ago. 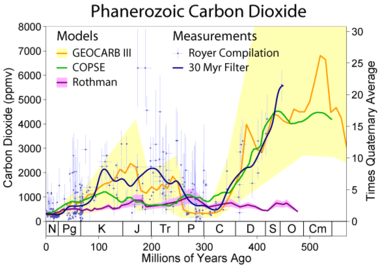 If you are still not convinced we are in a global warming state of emergency, or you want to see more detailed science on this life critical issue, please click here. Be sure to come back to this briefing after you review the materials at this link. There's still important parts of the global warming emergency briefing you haven't seen yet!

Overviewing the implications of the climate science

Crossing one or more critical global warming tipping points will cause the temperature of the earth to rise rapidly by 3 to 4 degrees Celsius, (5-8 degrees Fahrenheit) and more. Eventually, if we cross one or more of the critical climate tipping points our average global temperature will rise to 6 degrees Celsius or more (about 12 degrees Fahrenheit) unless radical, costly, painful remedial action is taken immediately. (If you have not already read the detailed explanation at this link on why we never ever want to cross any critical climate tipping point, we strongly recommend you do so now.)

How soon the world will go to a 5-, 8- or 12-degree Fahrenheit increase is uncertain. If we cross any critical global warming tipping points, we will soon be seeing sudden and radical increases in global temperature in just a few decades, far sooner than what is being predicted by the UN’s IPCC. In the climate history of Earth there have been numerous geologically sudden, large temperature changes over periods as short as several decades. This means another radical average global temperature change occurring within just a few decades would not be at all unprecedented.

Even if we don't cross one or more of these global warming critical tipping points, it now looks like we will be facing a 10-foot sea level rise by 2050. That's not even including the periodic King (full moon) tides and severe storm surges that could regularly add an additional 3-7 feet of sea water on top of the 10-foot sea level rise that will hit the coasts of the world. One doesn't need much of an imagination to grasp what the devastating aftermath would look like in our coastal areas where 50% of the world’s population currently lives.

We as individuals, corporations or nations are not prepared for the effects of crossing any critical global warming tipping point. For example, catastrophic effects are occurring more extensively and faster than expected at just 1 degree Celsius of warming—i.e., extreme storms like Hurricanes Sandy and Katrina, droughts and wildfires, Arctic Sea ice loss, and highly accelerated melting of the Greenland and Arctic ice sheets. One global warming expert, Kevin Anderson, states that an increase in average global temperature of 2 degrees Celsius is actually the real threshold between dangerous and extremely dangerous global warming and climate destabilization.

What we are also currently not being told by our leaders is that if we allow ourselves to unconsciously or inadvertently cross one or more of the most critical global warming tipping points, humanity will likely be facing the unbearable reality of irreversible global warming or extinction-level climate destabilization that could eventually also lead to the runaway global warming known as the Venus effect (the name given to the climate event in which all of Venus’s atmosphere was stripped away into space.) The crossed critical climate tipping point peril makes the escalating global warming emergency a risk level that is even greater in scale, severity and in long-term destructive effects than global thermonuclear war.

In our ignorance about the danger of crossing one or more of the critical climate tipping points, we are currently living at extreme, unconscionable and intolerable risk levels as it relates to the future of society and humanity—something that should arouse and arrest the sensitivities of any rational person.

We must act now even if this immediate action means radical, painful and costly sacrifice and change. If we do not evolve wisely regarding this challenge, we and our children, grandchildren and future generations will suffer beyond anything that a rational person would ever want to imagine.

“Escalating global warming is not just an inconvenient truth as Al Gore brought to our attention in his famous movie of the same name. It is a truly unbearable truth for those who clearly understand what it will mean in suffering for our own lives, our children and future generations.”  - - - Lawrence Wollersheim

Please Go to the next page in this briefing called: What to do about the escalating global warming emergency.